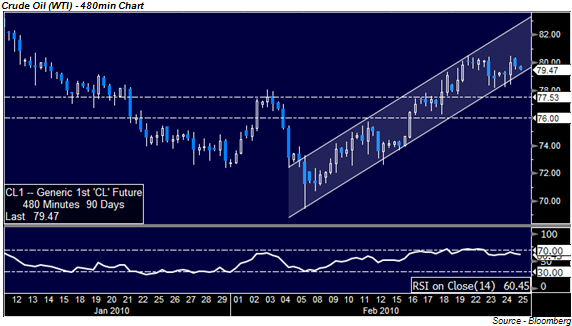 Crude Oil (WTI)        $79.53       -$0.47       -0.59%
Technical positioning is essentially unchanged from yesterday: prices at the bottom of a rising channel set from the swing low established earlier this month (now at $79.17), with a break lower exposing horizontal support at $77.53 and ultimately the $76 figure. The push lower may be catalyzed as risky aversion makes a comeback in the wake of comments from ratings powerhouse Standard & Poor’s, who said that they may downgrade Greece again by the end of March. This comes on the heels of yesterday’s downgrade of Greece’s four top banks by Moody’s. The issue has also been compounded by comments from Greek Deputy PM Theodoros Pangalos, who told the BBC that Germany has no right to criticize his country after devastating it under the Nazi occupation, adding that the current crop of EU leaders are of “very poor quality” and unfit to manage Europe’s fortunes. Such outbursts will make it all the more difficult for Western Europe to sell a Greek bailout to its electorates, who are already upset with the idea of spending their tax money to finance southern Europe’s spendthrift policies, making the likelihood that the troubled region is left to its own devices significantly more likely. The prospect of a sovereign default with the Euro Zone has sent investors fleeing out of risky assets, with stocks broadly lower in Asia as well as opening in the red in Europe. US equity index futures are likewise in the red, hinting that oil may mount a push lower considering the near-term percent change correlation between crude and the MSCI World Stock Index stands at a firm 0.91. January’s US Durable Goods Orders and weekly Jobless Claims figures headline the economic calendar.

Silver       $15.75       -$0.22       -1.39%
Technical positioning is unchanged from yesterday: are trading sideways above horizontal support at $15.68, with near-term resistance at the bottom of a previously broken rising channel set from the swing low set earlier this month. The correlation between the cheaper precious metal and the MSCI World Stock Index matches that of its more expensive counterpart at 0.75, suggesting bearish momentum is set to resume. A break past current support exposes considerable downside potential toward the $15.00 figure. 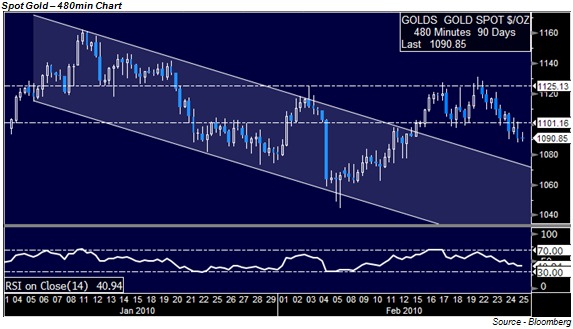