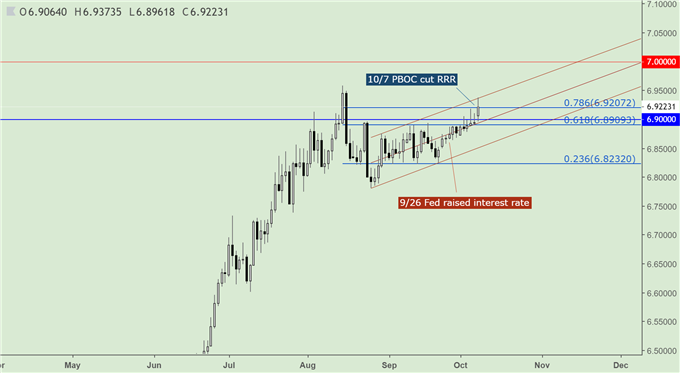 The USD/CNH broke above a key psychological level of 6.90 on Monday, following PBOC’s 4th cut on the reserve requirement ratio (RRR) this year. Effective on October 15, the RRR on most Chinese banks will be reduced by 1.0%. This is expected to add 750 billion Yuan liquidity to the money market, after excluding the 450 billion Yuan withdrawals through Medium-term Lending Facility (MLF).

For Chinese companies, this is good news as their borrowing costs in the money market could be reduced in the near-term, when China maintains the prudent monetary policy in general. However, the move fueled bearish momentum in the Yuan, especially when Fed is on a different track, hiking rates. On Monday, the USD/CNH touched 6.9374, the upper band of a parallel.

With a December Fed rate hike likely underway, the odds of the USD/CNH breaking its record high of 6.9865 since it was quoted in 2010, and testing the next key level of 7.0 by the end of this year has increased.

Yet, in the near-term, PBOC’s guidance will continue to play a key role. The daily reference rate set by the regulator on Monday was 6.8957, still below 6.90. This is the first guidance rate after China’s onshore market was closed for a 7-day holiday and no reference rate was provided. If the regulator tries to calm the market with its policy tools, the rise in the USD/CNH may pause. Thus, keep an eye on PBOC’s daily reference rate on Tuesday, as well as if any move on the uncommon tools, from offshore central bank bills, to the reserve requirement ratio on FX forwards.