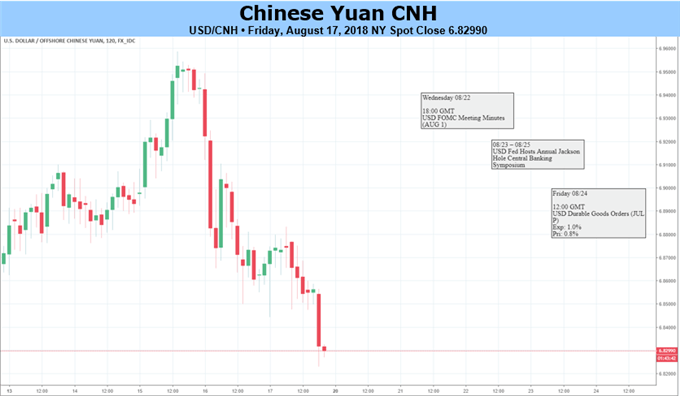 The offshore Chinese Yuan gained against the U.S. Dollar this week after nine consecutive losses, amid the PBOC’s further intervention to defend the Yuan. Overall, the Chinese currency rose against seven of the G10 currencies, except the CAD, JPY and NZD. The Hong Kong Dollar, used in one of China’s autonomous territories, touched the lower band of its pegged currency regime and triggered local monetary authority’s intervention. Looking forward, both currencies will continue to eye on policymakers for support, amid both internal and external pressure.

China’s Central Bank shut down channels for commercial banks to deposit or lend the Yuan to the offshore market through the free trade zone scheme, after the USD/CNH jumped above 6.90 on Wednesday. This basically tightened the offshore Yuan liquidity and increased the cost of Yuan short. Following the move, the USD/CNH fell back below 6.90. 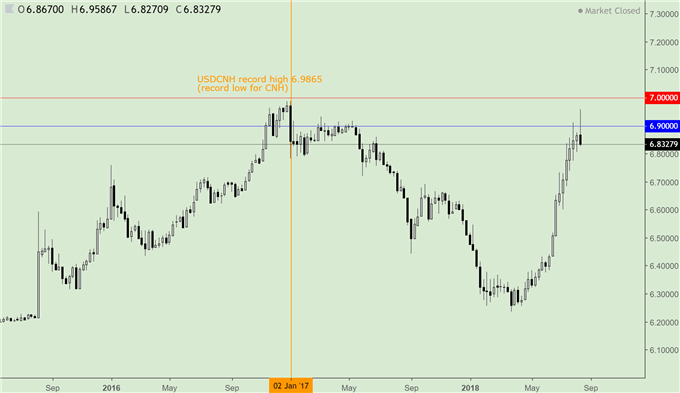 Two weeks, the PBOC hiked the reserve requirement ratio on FX forwards last week, after the USD/CNH hit above 6.90 for the first time in 15 months. Breaking above this level could spark further selling sentiment, as it approaches the record low level of 6.9865 for the Yuan. In addition, it leaves little buffer area before the rate can touch the critical psychological level of 7.0. The last time the Yuan at 7.0 was more than 10 years ago, even before the offshore Yuan exchange rate regime was introduced.

The PBOC has clearly stated in the Q2 report that it will counter against the excessive selling in the Yuan driven by sentiment. Coupled with resumed plunges in Chinese equities seen this week (Shanghai Composite Index dipped to 17-month low), calming markets will be one of the policymaker’s top priorities next week. Besides the above two uncommon measures, the regulator issues the daily reference rate, which has been held below 6.90 as well.

Challenges to Defend the Yuan

Uncertainties around the US-China trade war remain. The two parties will resume negotiations in late August but both have become cautious, with only Vice Ministers attending the meetings; this is downgraded from Minister-level-and-above meetings seen in April and May, when the two sides failed to reach a consensus. At the same time, the tit-for-tat attacks are underway: US tariffs on $16 billion Chinese goods, the second batch of a total $50 billion, will enter effect on August 23; China’s retaliation on the same amount of US goods will follow immediately. The uneased tensions in trade could dampen market sentiment in the Yuan.

China’s fundamentals are less likely to help much either. The July Retail Sales and Industrial Production both dropped from the last month and below expectations, hinting weak consumption and production. In addition, Fixed Assets Investment, which is considered to expand at around the same rate of GDP, set a new record-low of 5.5% in July. Besides the domestic difficulties, the contagion of high volatility in emerging-market currencies seen recently has the Yuan at risk as well.

The USD/HKD touched 7.85, the lower limit for the Hong Kong Dollar’s trading band under the current pegged exchange rate regime. In order to maintain the regime, Hong Kong Monetary Authority (HKMA), which serves as an independent central bank in Hong Kong Special Administrative Region, purchased a total of HK$16.8 billion during three consecutive days from August 14. This is equivalent to sell US$2.1 billion to the market.

The recent plunge in emerging market currencies was a trigger to the Hong Kong Dollar’s weakness this week. Yet, the main contributor was the widened interest rate spread between the HKD and USD. Since the U.S. Fed began to increase rate in late March, the pressure on the Hong Kong Dollar has become intensified. 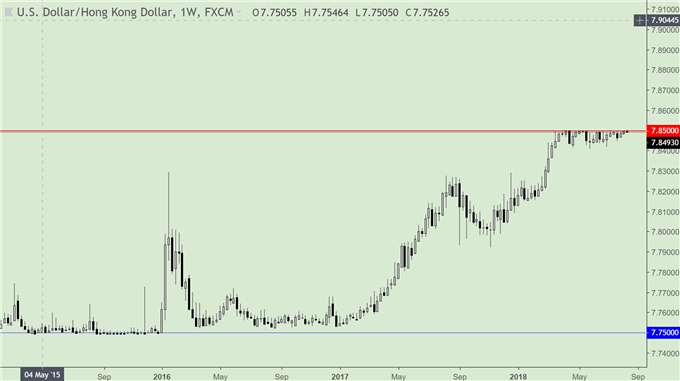 Next week, with the Jackson Hole meeting and FOMC minutes underway, the Hong Kong Dollar will likely continue to bear downward pressure, which means HKMA will need to continue to sell the USD and purchase the HKD to maintain the pegged exchange rate regime.