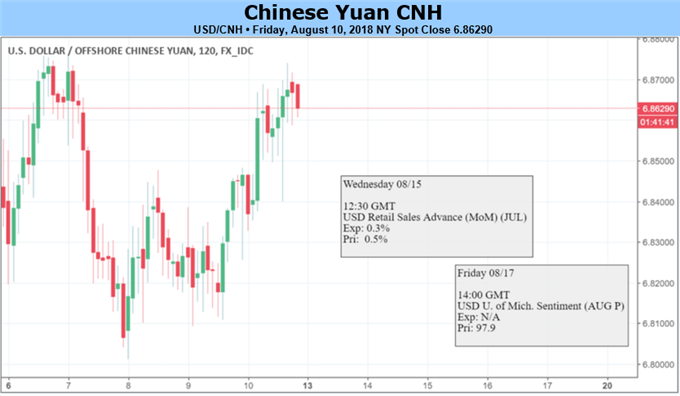 The Chinese Yuan lost against the U.S. Dollar this week, though failed to set a new swing low; it also gained against the EUR, GBP, AUD, CAD and NZD, indicating some recovered strength. Next week, The PBOC may continue to support to the Yuan; event risks from economic gauges could elevate Yuan's volatility. Also, arbitrage opportunities emerge in the petro-yuan, as the spread against petro-dollar widended.

PBOC’s View on the Yuan

China’s Central Bank has taken a series of measures to calm the Yuan selling. On Monday, the hike in RRR on foreign exchange forwards entered effect. On the same day, the regulator told it may resume the counter-cyclical factor that was suspended in January, when it met with banks that provide quotes for it to calculate the daily reference rate. The policymaker used the “factor” a couple of times in the past to guide the Yuan when excessive selling was seen.

Also, an emphasis of “PBOC’s role in stabilizing market expectations when FX and equites become volatile” is added to the Monetary Policy Implementation Report for the Second Quarter. It is stated that the regulator “may intervene the market when see a need to counter against cyclical moves and maintain the Yuan stable and at reasonable levels.” In the coming week, investors will want to keep a close eye on PBOC's daily reference rate.

China will release the July prints of Retail Sales, Industrial Production and Fixed Assets Investment Excluding Rural Areas on Tuesday. These gauges set some record-low levels in the second quarter, contributed to the Yuan weakness at that time. On July 6, the U.S. customs began to charge additional tariffs on $34 billion Chinese goods. Thus, the July figures could provide further clues on how much impact the US-China trade war has brought to Chinese consumers and producers.

The Yuan-denominated futures that were launched on March 26 surged and hit the daily limit of 5% hike on Tuesday. Over the same time, the Brent oil price only rose +0.34%. The spread between Yuan oil price and Brent oil price extended to more than 30 yuan/barrel, while in the past, the spread was normally between 10 to 20 yuan/barrel. Amid the enlarged spread, arbitrage opportunities have increase.