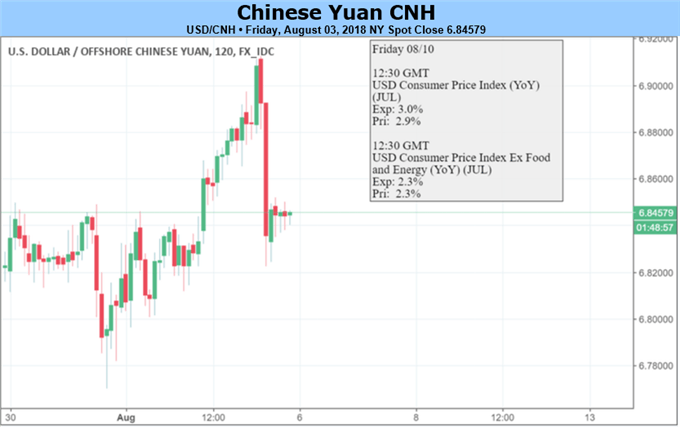 The Chinese currency extended losses against the U.S. Dollar for the eighth consecutive week in both onshore and offshore markets. On Friday, the USD/CNH hit 6.9126, the weakness level for the Yuan since May 2017. Yet, the pair has pulled back following the support by China’s Central Bank. Looking forward, a heavy economic calendar have the Yuan at risk from home. In addition, the on-going US-China trade war and China’s domestic financial risks will continue to weigh on the Yuan rate.

China’s Central Bank raised the reserve requirement ratio (RRR) on foreign exchange forwards on Friday, from 0% to 20%. Chinese banks offer FX forwards to companies that want to hedge against the currency risk in the future. When the Yuan is weak, companies tend to purchase FX forwards, for instance USD forward. Then the bank that offers the product will purchase the underlying asset, USD, in the spot market, to make sure it can provide the asset in the future. Then this increases the demand in USD and then further escalate Yuan’s selling in the spot market.

PBOC’s RRR hike on FX forwards basically will increase the cost of the Yuan short. As discussed before, too fast devaluation will increase regulators’ concerns on financial risks, despite that it can help make up for some losses led by the US tariffs. In the coming week, the PBOC may continue to calm the Yuan which has tumbled for eight weeks, through the daily reference rate. Also, a panic mood in the currency market could trigger large capital outflows, which will hurt China’s foreign reserves. The July figure to be released on Tuesday will reveal some clues on the matter.

Concerns on the effectiveness of the country’s monetary policy have rose. China’s Politburo meeting hints that monetary policy will not be a primary tool to support the economy. It does not mean that the tool is no longer important; instead, the Financial Stability and Development Committee pointed out it is that monetary policy’s transmission mechanism needs to be improved.

With a less effective mechanism, China’s Central Bank faces a dilemma: on one hand, many companies are in short of cashes and find it hard to borrow from banks. They need more liquidity. On the other hand, the price bubble risk in the real-estate sector remains elevated, with home loads continuing to pile up. This constrains the regulator to launch broad easing measures. In the coming 1-2 weeks, China has an unscheduled release on July New Yuan Loans. The proportion of home loans will provide clues of how serious of the price bubble risk is.

This past week, the PBOC hired two new deputy governors and SAFE, China’s FX regulator, hired one. The new officials who had decades of experience in multiple financial sectors may help the Central Bank to come up better solutions to the policy dilemma and other challenges in the financial market.

China will release the exports and imports prints for July on Wednesday. The impact of US tariffs on $34 billion Chinese products to Chinese exporters (as well as US exporters) may begin to be seen. Over the past week, the two sides have taken more hostile actions than cooperative moves. And it seems that the hits on China were more harmful than the other way around:

The US Trump administration threatened to increase tariffs from 10% to 25% on the $200 billion worth goods from China. In addition, the US Commerce Department added 44 Chinese companies to its export control list. On China’s end, the Chinese Commerce Department announced to impose tariffs on $60 billion US products for retaliation. One positive move is the meeting of Chinese Foreign Affair Minister and US Secretary of State, though no real progress is achieved.