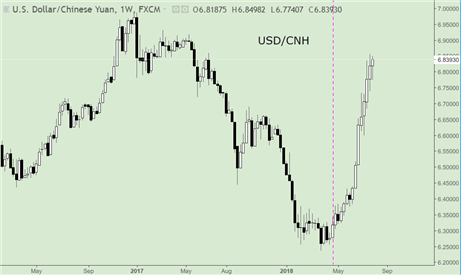 China Targets at Unemployment, Financial Risks, Trade in 2nd Half of 2018

China’s Strategy for the Second-Half of 2018

An Unemployment Rate Target - Why does it Matter?

The targets revealed the challenges that China is facing and its priorities.

The unemployment rate was not mentioned often before this top meeting. It is neither a key gauge that impacts China Central Bank’s monetary policy, unlike in the U.S. However, Chinese top policymakers have set it as the first goal for the economy in the second half of 2018. This indicates an urgent need to solve this issue.

In the second quarter of 2018, the survey rate was 4.80% and the registered rate was 3.83%. Both are lower than the annual targets set at the NPC meeting in March: 5.5% and 4.5% respectively. Yet, as mentioned earlier, top policymakers have seen a need to curb the unemployment rate over the following six months, a signal that the economy may have or will bear greater pressure than it does now. This reinforces Yuan’s bearish outlook.

The second goal in the second half of 2018 is to continue to curb financial risks, including further cutting leverage. This task will fall on to China’s Central Bank (PBOC) and other financial regulators, such as SAFE (FX regulator), China Securities Regulatory Commission (securities regulator).

This also means that Chinese monetary policy will be primarily used to deal with financial risks, rather than stimulating the economy. The latter will have to reply more on fiscal policy. The PBOC has called for a more proactive fiscal policy by the Finance Ministry recently and the Politburo meeting agreed on such a measure.

In the first half of 2018, the PBOC cut the reserve requirement ratio twice, in the effort to increase liquidity to target sectors. It may cut more in the second half, but it will unlikely to change the overall tone on the monetary policy: prudent and neutral. As a result, the Chinese currency will likely avoid suffering from massive easing measures.

"External Environment has significantly changed”, stated in the Politburo meeting report. This mostly refers to the escalated US-China trade disputes and shows the top policymakers’ concerns on this matter. China’s third and fourth targets for the next six months is to support trade and foreign investment.

While the U.S. released $12 billion bailout plan for farmers, China may introduce similar subsides to exporters who suffer in the trade battles. In addition, China will likely continue to seek to strengthen relations with other trade partners. However, these measures will not be able to cover all the losses caused by the trade war and they could only be temporary fixes; the economy may have to suffer from the trade fight for months, if not years.

A Review:US-China Trade War: An Inevitable Conflict and The Impact on Equities, FX

The Yuan began to lose against most major currencies including the U.S. Dollar in late April, when US-China trade battles heated up. The bearish trend remains amid both the internal and external challenges.

Yuan’s loss against the U.S. Dollar started in late April. 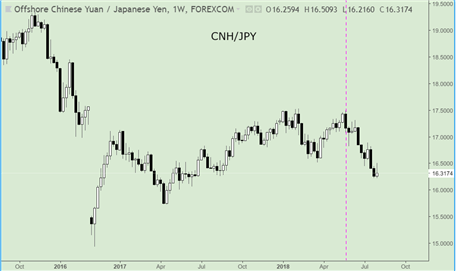 Yuan’s loss against the Japanese Yen started in early May. 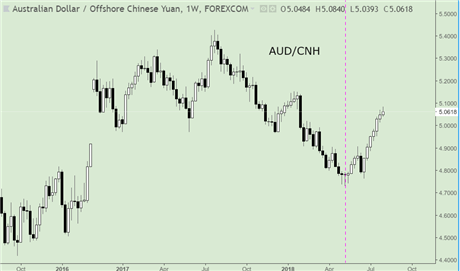 Yuan’s loss against the Australian Dollar started in late April. 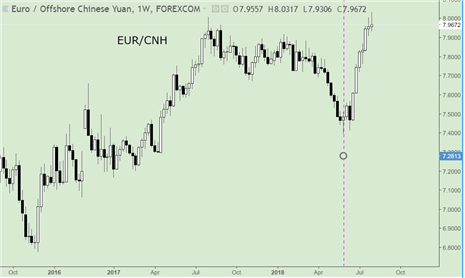 Yuan’s loss against the Euro started in late May.