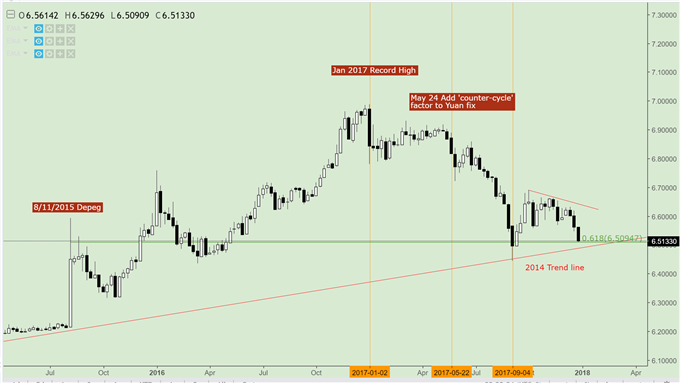 The offshore Chinese Yuan (CNH) gained +7.3% against the U.S. Dollar in 2017 and the onshore Yuan rose +7.0%. Dollar weakness, Chinese regulator’s guidance, as well as China’s on-target growth have all contributed to Yuan’s advance.

Chinese fundamentals set the foundation for a relatively stable Yuan. The country’s growth rate target was set to be around 6.5% in 2017. Despite of the 25+ year low level, the economy has avoided hard-landing and financial catastrophe and is expected to achieve the target or even beat it. Also, the PBOC has implemented a prudent monetary policy in 2017, which was tighter than in 2016.

Dollar’s weakness and PBOC’s guidance were the other top drivers. From January to May, the USD/CNH remained mostly in a range, despite that the Dollar weakened over the same span of time. This caused the Chinese regulator’s concern on a failing exchange rate regime. As a result, the PBOC introduced a counter-cycle factor in calculating Yuan’s daily reference rate. This is a major adjustment in Chinese exchange rate regime since the PBOC de-pegged the Chinese currency against the Dollar in August 2015.

Following this move, the Yuan restored momentum against the Dollar in the third quarter and hit the yearly-high level of 6.4433. In the last quarter, the Yuan pair entered a range, amid Dollar’s picking up and lack of domestic improvement. At the end of 2017, the USD/CNH fell to a long-term support zone (resistance for the Yuan).

Economic Growth Target: A Shift from Speed to Quality

After targeting rapid growth rates for decades, China decided to back away and move to focus on high quality of expansion at the end of 2017. The country acknowledges that there are more prioritized issues to be solved, such as overcapacity, industrial upgrades; while dealing with these problems, maintaining a high growth rate is neither practical nor sustainable. In 2018, China is likely continue to use a soft GDP target as in 2017. The detailed number will be announced at the annual National People’s Congress (NPC) which is normally held in early March. Also, keep an eye on the PBOC and National Development and Reform Commission, as they could send out signals before NPC.

With a shift to the “short-term pain for long-term gain” mode, China’s economic growth in 2018 may continue to slow down. For investors, they will need more leading indicators to better evaluate how well China is solving domestic issues and developing new momentums. Fixed asset investment, specifically, private investment in fixed assets will be useful measures. The private sector contributed roughly 80% of total jobs, 60% of GDP and 50% of tax income. In addition, private firms are more sensitive to economic cycles than state-owned enterprises. As of November 2017, private investment in fixed assets has dropped to one-year low of 5.7%. Unless this gauge shows sustainable improvement, it will be too soon to say the Chinese economy is recovered.

China’s monetary policy is expected to remain neutral and prudent in 2018. This is because the Central Bank is facing a dilemma between loosening policy to stimulus the economy and tightening it to curb financial risks. Between these two goals, the PBOC prioritized risk control over growth, which is also consistent with the nation’s shift in economic targets. This does not mean policymakers no longer care growth; the Finance Ministry and Taxation Administration will continue to adopt proactive fiscal policy to support the economy. Yet, for the Central Bank, ensuring financial stability becomes the primary goal.

Within such content, the PBOC is unlikely to cut benchmark interest rates. Instead, it would use different types of temporary tools to meet market liquidity need in the short-term and medium-term. These measures include reverse repos, Medium-term Lending Facility (MLF), Standing Lending Facility (SLF) and Temporary Liquidity Facility (TLF). In terms of reserve requirements, the regulator could continue to lower the ratio for targeted banks (e.g. those can issue enough loans to small-sized firms) or temporarily allow targeted banks to reduce the reserves (like what was announced on Dec 29). When the PBOC will make a fundamental change in policy would depend on the progress in controlling financial risks.

Since the third-quarter of 2017, the PBOC has moved from a one-policy system (monetary policy) to a duel system (monetary policy and macro-prudent policy). This will continue to be the case in 2018. Macro-prudent policy aims to counter against financial cycles. The risk of housing price bubbles is the top financial risk that regulators are monitoring. New Yuan Loans, home loans’ proportion and housing prices are key gauges to measure this risk. In order to further ease this risk, the PBOC could cooperate with other banking regulators and local governments in placing further restrictions on home loans and purchases.

Uncertainties in trade with its major counterparts is another risk for China in 2018. Tensions with the U.S. were at peak level in the first quarter of 2017, then eased after Trump-Xi’s first meeting in April, rose again in the latter half of 2017 and toned down once again after Trump Xi’s second meeting in November. This “up -down-up-down” mode is likely continue to be the case in 2018. There are real disagreements in trade between the two parties, but for China, a “trade war” is least favorable, as it could hurt the country more than its counterpart.

In 2018, China may embrace increasing external impact through opening up its domestic financial markets as well. The country announced in November to relax restrictions on foreign ownership of financial institutions including banks and securities. This signals China would like to further involve in global markets, which could generate new growth momentum for the economy and attract capital inflows. However, how to manage financial risks while it has already been busy dealing with many of them is a challenge. The opening-up theme is worth to keep an eye on as it could potentially bring China both positive and negative impacts.