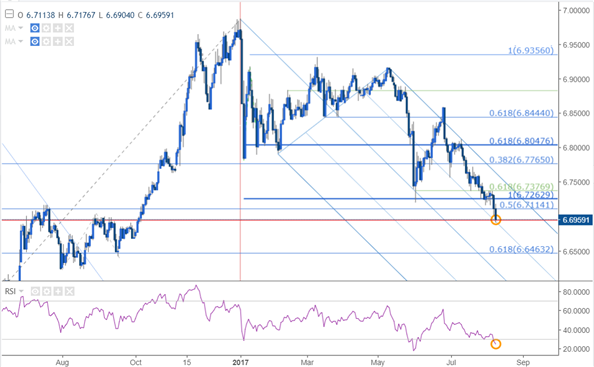 - Tensions between the U.S. and North Korea, as well as mixed Chinese data have the Yuan at risk.

The offshore Chinese Yuan against the U.S. Dollar dipped 6.6904 on Wednesday, the strongest level for the Yuan since October 4th, 2016. Dollar’s recent weakness and PBOC’s guidance have contributed to Yuan’s rally. At the same time, the tension between the U.S. and North Korea as well as mixed Chinese data have the Yuan pair at risk. Also, from a technical point of view, the USD/CNH has dropped to a key support level, and RSI fell below the 30% line. Thus, a retracement is possible in the near future.

The PBOC strengthened the Yuan by 109 pips or +0.16% against the U.S. Dollar to 6.7075 on Wednesday, the strongest Yuan fix in ten months. Dollar’s down trend has been running for over seven months and this has not been reversed despite of the retracement seen early this week. Within such context, the Yuan extended gains against its U.S. counterpart.

However, there are still uncertainties around the Yuan rate. In the near future, risk aversion driven by Trump’s response to North Korea’s nuclear threats could have a greater impact on the second largest economy in the world. China not only plays an important role in North Korea nuclear talks and bear pressure from both sides, but is physically adjacent to North Korea. Any armed conflict between the U.S. and North Korea would be the last thing that China wants to see.

So far, significant influence caused by the tension has not seen in Chinese markets: Shanghai Composite Index and Hang Seng Index lost -0.19% and -0.35% respectively over the past session, while, Shenzhen Component Index rose +0.46% over the same span of time. This does not mean that greater impact will not be seen over the following days, if the tension becomes worse. 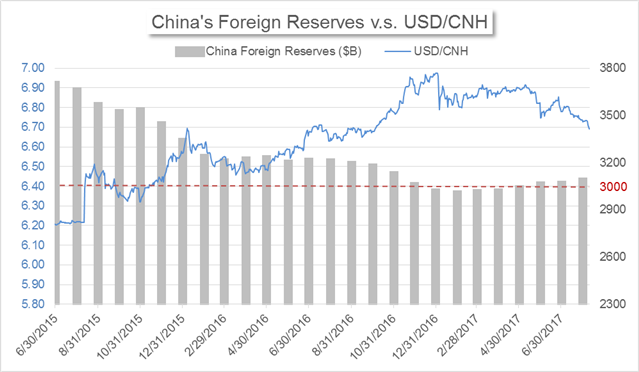 On the other hand, expansion in both exports and imports slowed down in July; inflation remained subdued, with the CPI growth rate falling to 1.4% in July, far from the target of 3.0%. These worse-than-expected prints indicate the economy still face considerable challenge in growth. Looking forward, the July New Yuan Loans figure is worth to keep an eye on. A high ratio of home loans to total loans hints at the elevated risk of price bubbles in the Chinese financial markets, which may hurt the Yuan rate.