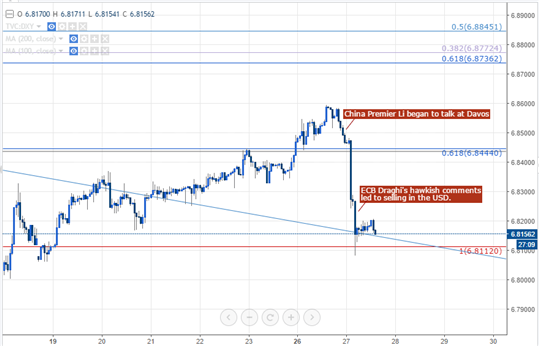 - China’s Premier Li’s comments on the economy added confidence into the Yuan.

- The next key indicator to watch is China’s official PMI print for June.

China’s Premier Li Keqiang expressed his confidence in the economy at the Summer Davos Forum on Tuesday. He told that during the first five months of 2017, economic indicators have shown improvements, China’s foreign reserves rebounded and Yuan exchange rates have maintained relatively stable. He reiterated that China will not experience a hard landing.

The Yuan started to gain against the U.S. Dollar since the early Asian session on Tuesday. Li’s comments added strength into this rally. Later in the day, when ECB’s President Draghi talked in a less-dovish tone on the central bank’s monetary policy, the Euro rose against the U.S. Dollar; because of the selling in the Dollar, the Yuan also extended gains against the Dollar, with the USD/CNH dipping 6.8083, the strongest level for the Yuan in a week.

Looking forward, China’s official manufacturing PMI print for June to be released on Thursday will be a key driver to Yuan rates. The May official read held unchanged at 51.2 from the month prior and stayed in the expansion territory (above 50); however, the Caixin print for the same month fell unexpectedly to 49.6, the first time in 11 months dropping to the contraction territory.

The official gauge measures larger firms than the Caixin gauge does; bigger-sized producers are normally less sensitive to economic cycles than smaller ones. Thus, if the official print for June came to be worse-than-expected (especially if it falls below 50), that will indicate a major problem in the manufacturing industry and will be bad news for the Yuan. Currently, the USD/CNH is testing the upper band of a downward parallel. A dampened outlook on Chinese manufacturing industry could lead to a sustainable breakout for the pair. 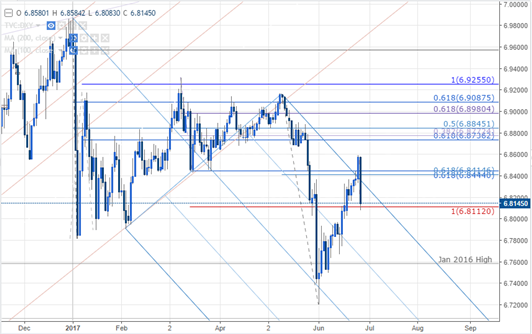