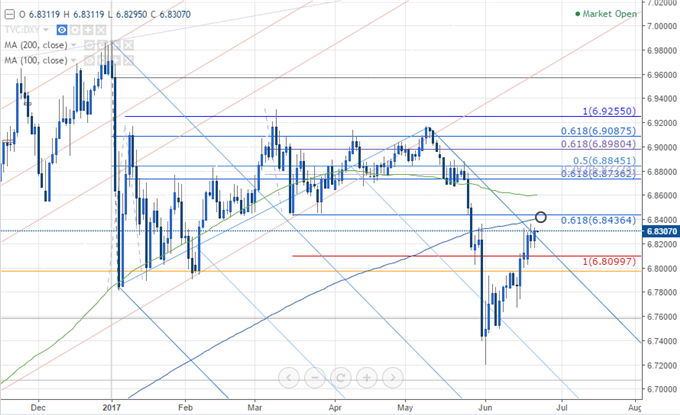 - The USD/CNH pulled back and is testing a major resistance after MSCI’s decision.

On Wednesday, following the MSCI’s decision, Chinese stocks gained: Shanghai Composite Index rose +0.52% and SZSE Composite increased +0.76%. In specific, CSI300, an index including top 300 stocks on both Shanghai and Shenzhen exchanges, soared +1.17% and closed at a one-and-half-year high.

MSCI’s recognition is expected to increase the demand in Yuan-denominated shares. Yet, remember China currently maintains capital controls on financial markets; thus, the supply of Chinese stocks available for overseas investors is determined by the pace of China further opening up its markets. The channels for foreign investors to directly purchase Chinese equities are limited right now, such as Shenzhen/Shanghai - Hong Kong Stock Connect, but when China increases those channels, moves similar as what were seen on Wednesday could happen again: investors relocate their funds from other Asian countries to China. This means that with a global recognition, China’s opening up in its financial markets will not only impact itself, but could largely affect its neighbor countries.

The next major channel that is in the preparation phase is a trading link between London and Shanghai, so called Shanghai-London Stock Connect. UK’s divorce with the EU has escalated the process of such an introduction. On Wednesday, the Vice Chairman of China’s Securities Regulatory Commission Jiang Yang told that the regulator has been making steady progress in preparing the link. MSCI’s inclusion set the global stage for China; what “shows” will be performed on the stage and when they will start are determined by China. Thus, investors will want to keep a close eye on the development of Chinese financial markets.

The MSCI approval led to a pullback in the USD/CNH, falling below the top line of a parallel. Currently, the offshore Yuan pair is still testing the upper bound of this channel. The next level to watch is 6.8436, 100% extension of the March range and 100-day moving average.