- A break above 6.8845 for the USD/CNH may suggest a more meaningful upward trend for the pair.

- The PBOC lowered the Yuan by -47 pips or -0.07% against the U.S. Dollar to 6.8790 on Tuesday. The offshore Yuan weakened against the Dollar for the fourth trading day in a row, to 6.8635 as of 11:35am EST. Yet, the offshore pair remained stronger than the PBOC’s guided level as well as the onshore Yuan. If the USD/CNH can show a sustainable break-above 6.8845 (February high, 50% retracement of January drop and the top of a parallel), the prospect of a bullish trend for the pair (bearish for the Yuan) would be more likely. 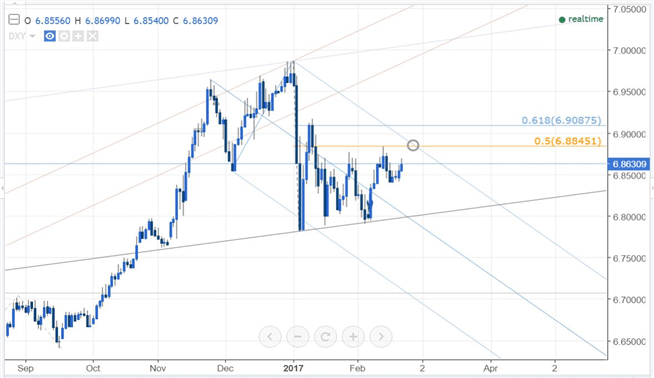 - Some Chinese banks will be no longer qualified for a reduced reserve requirement ratio (RRR), beginning on February 27th, according to a statement released on the PBOC’s official website on Tuesday. Under the Central Bank’s targeted RRR policy, banks may enjoy a reduced RRR if they can meet the criteria of issuing a certain amount of loans to agricultural companies as well as small- or micro-sized firms. Normally, banks are less willing to lend to those companies as they are considered to be risker than larger-sized companies or state-owned enterprises. The targeted RRR policy aims to encourage banks to provide funds to these sectors that need support. According to the PBOC’s assessment, most banks will be still qualified for a preferable rate in 2017.

- China will use three approaches to attract foreign investment in 2017, told by China’s Commerce Minister Gao Hucheng at a press conference on Tuesday: A) The country will further reduce restrictions on foreign investment; B) regulators will simplify the investment process in the effort to facilitate overseas companies. C) The government will fully implement the policy that foreign investors will be granted national treatment.

China’s foreign reserves dropped below $3 trillion in January. Attracting more foreign direct investment to China will not only help the country to open up its domestic market, but may also increase capital inflows, which may slow down or reverse falls in foreign reserves.