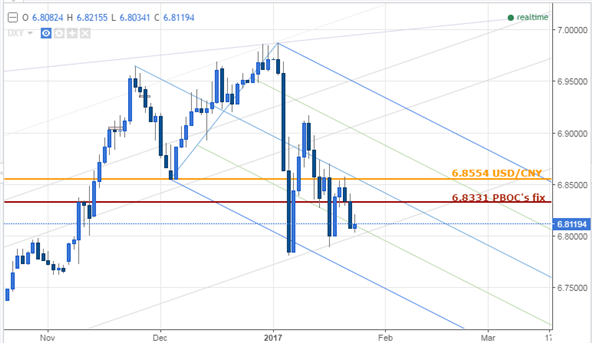 - China’s fiscal deficit in 2016 came in greater-than-expected and will likely continue to widen in 2017.

- China’s Central Bank raised two interest rates on January 14th, the first time of such increases in nearly six years: the lending rates for 6-month and 1-yearMedium-term Lending Facility (MLF) have been both lifted by +10 basis points to 2.95% and 3.10% respectively. These adjustments are intended to stabilize liquidity in the banking system, according to a statement by the PBOC. 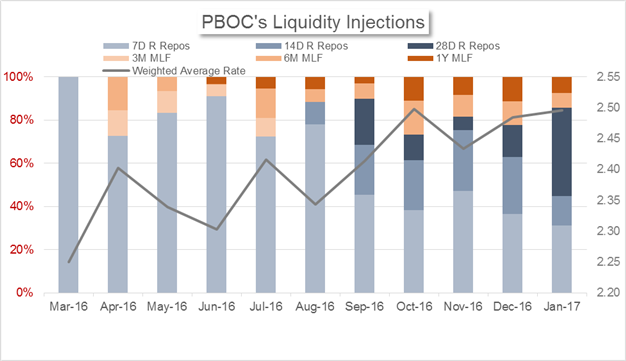 The move may be a surprise for some market participants, as normally, the regulator would increase injections as it approaches to the Chinese New Year when liquidity tightens. However, we discussed that China’s Central Bank has started to tweak its credit strategy by increasing the average cost and the lending term of funds since last August. Also, China’s monetary policy in 2017 has changed to “prudent and neutral” from “prudent” in 2015 and 2016; the liquidity target in 2017 changed to “maintaining liquidity basically stable” from “keeping liquidity reasonably ample” stated in 2015 and 2016. Adjustments on MLF rates on Tuesday are regulator’s move following these revised targets. Amid the unsolved risk in price bubbles, we may see additional tightening measures from Chinese regulators over the following periods.

- China’s fiscal income in 2016 rose +4.5% to 15.9552 trillion Yuan, while fiscal expenditures increased +6.4% to 18.7841 trillion Yuan, according to a report from China’s Finance Ministry released on Monday. The fiscal deficit was 2.83 billion Yuan, higher than the expected deficit of 2.18 billion Yuan. In 2017, China’s economic growth is expected to drop further to 6.5%; at the same time, monetary policy will not be loose. Within such a context, the Chinese government will have to rely more on fiscal stimulus. Amid further tax cuts, the expansion in government’s income will likely continue to slow down. Increasing expenditures and falling income would lead to a greater deficit for the country in 2017.

- China’s employment condition is expected to remain stable in 2017 in general, yet with some concerns, according to a press briefing hosted by the Ministry of Human Resources and Social Security. The structural imbalance has become worse: high-skilled labor is in short while many low-skilled workers cannot find jobs. China’s on-going supply-side reforms may aggravate this imbalance as producers are required to cut capacity and some may even have to shut down and dismiss employees. Manufacturing workers in China are normally low-skilled, which makes it harder for them to find new jobs.