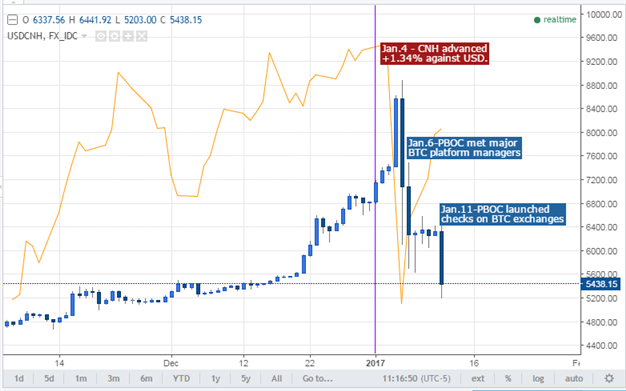 - Chinese investors use Bitcoin as an alternative to purchase foreign currencies amid tightened oversight.

- The headline Yuan rate today is not the Dollar/Yuan, but the Bitcoin/Yuan, which plunged nearly -7% within one hour following the release of the PBOC’s official inspections on Chinese Bitcoin companies.

On the afternoon of January 11th, the Beijing and Shanghai offices of China’s Central Bank announced through statements in quick succession that they launched on-site investigations on Bitcoin exchanges, Huobi, OKCoin and Bitcoin China, regarding any possible rule violations. Ever since the 2017 New Year, Bitcoin has come into the spotlight as well as regulator’s focus due to its volatile moves. Last Friday, the PBOC have already met with managers from the three major Bitcoin platforms and asked them to conduct self-checks and rectify any problems.

The regulator’s move came after two-day volatile trading in Bitcoin: the BTC/CNY soared +15.4% on January 4th and then plunged -17.3% on the next day. Yuan’s strength after the New Year may have triggered the dramatic moves in Bitcoin. Since January 1st, 2017, Chinese regulators have strengthened oversight on individual purchases foreign exchanges. Amid the strengthened oversight, Chinese citizens exchanging foreign currencies in the first week of 2017 turned out to be less-than-expected, despite the fact that the annual quota of $50,000 was renewed on the New Year.

However, as the Chinese Yuan is likely to continue to weaken against the U.S. Dollar on expectations of at-least two more Fed’s rate hikes this year, Chinese investors still have incentive to buy non-Yuan assets and look for alternatives to directly using the annual quota. Some see the Bitcoin as an option, by first purchasing it with yuan and then selling it on foreign currencies. On January 4th, the Yuan strengthened against the U.S. Dollar by +1.34% offshore and +0.43% onshore, a timing that many investors saw as an opportunity for such transactions.

At the same time, a sudden increase in buying and then selling in Bitcoins raises regulators’ concerns on investors using the cryptocurrency to move capitals out of China, which may violate China’s current capital control policy. Plunges in Bitcoin on January 6th and 11th hint that investors may have withdrawn from this means to purchase non-Yuan assets after regulators stepped in to crack down illegal transitions; also, as the Yuan weakened against the Dollar on those days, the cost for purchasing non-Yuan assets rose up as well.