- The Yuan gained against the U.S. Dollar in early January once again.

- Technical Focus: Honing in on a Major USD/CNH Level

The Chinese Yuan seems to have a similar opening in 2017 as in 2016: rapid advance against the U.S. Dollar following hikes in HIBOR, which is the borrowing cost for the Yuan in Hong Kong, its largest offshore center. However, we may find some major differences after conduct a more in-depth analysis:

In the near-term in 2017, the Dollar strength/weakness driven by Fed’s rate hike expectations will remain to be the primary factor for Dollar/Yuan trends. Over the past two days, the USD/CNH moved in the same direction as the DXY Dollar Index. On January 4th, the USD/CNH lost -1.35% (the Yuan strengthened against the Dollar) while the DXY dropped -0.64%; the next day, the USD/CNH fell -1.15% while the DXY weakened -1.01%. 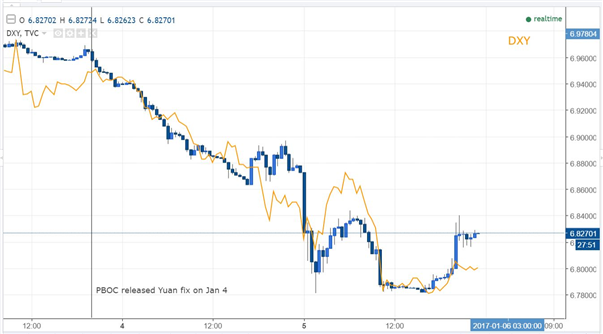 In January 2016, Yuan’s elevated volatility was mainly led by turbulence in Chinese domestic financial markets: Chinese equities plunged after the New Year following the introduction of a circuit breaker system which was suspended four days later. Yuan dropped as well amid global investors’ increasing risk-averse appetite. On January 6th, the USD/CNH rose +0.72% (Yuan weakened against the Dollar) while the DXY fell -0.13%. As Yuan’s funding costs picked up in Hong Kong offshore market, the Yuan gained against the Dollar with the USD/CNH dropping by -1.54% on January 11th while the Dollar Index increased +0.46% on the day. The overnight HIBOR hit record high of 66.815% on January 12th. 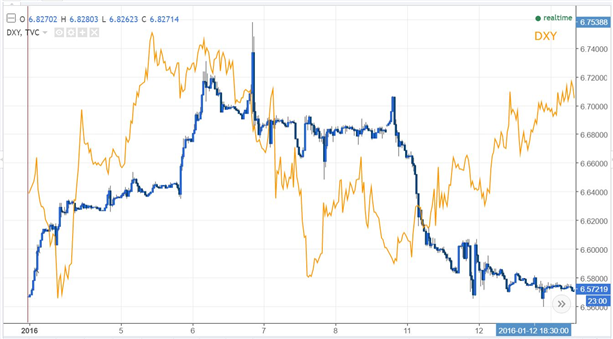 Also, we discussed that China’s Central Bank is less likely to cut benchmark rates before price bubbles are curbed and the liquidity mechanism is fully restored. As fundamentals for the Dollar/Yuan have changed in 2017 compared to a year ago, traders will want to keep an eye on Fed rate hike expectations in the effort to look for the trend for the Dollar/Yuan.