- The PBOC strengthened the Yuan against the U.S. Dollar for the first time in more than two weeks.

- Bank of China enters the Yuan futures market in Korea as a market maker and a clearing bank.

- The PBOC strengthened the Yuan against the U.S. Dollar on Tuesday, the first time in over two weeks: the Yuan was increased by +206 pips or +0.30% to 6.8779. Both the onshore and offshore Yuan rates steadied following the guidance. The USD/CNY was trading around the level of 6.8900, the 2008 high; the USD/CNH found some support along the 2012 trend line. 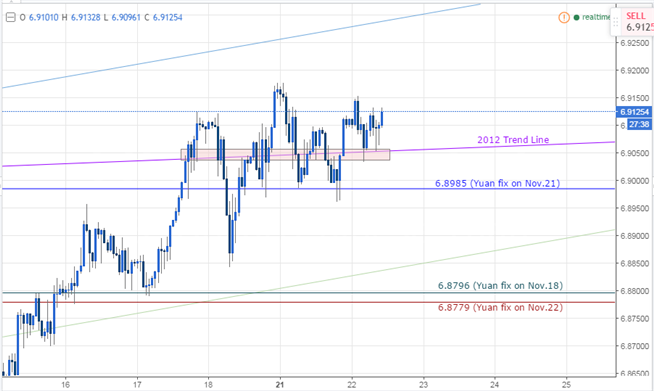 As the U.S. FX markets start to quiet down and prepare for the Thanksgiving holiday, we may continue to see reduced volatility in Dollar/Yuan rates over the next few days.

At the same time, the spread between China and U.S. 10-year government yields has seen significant drops since the U.S. Presidential Election. On November 18th, the spread fell to 55 basis points, the lowest level in 11 months. The narrowed gap between the two yields may put additional capital outflow pressure on China, which could further lower Yuan’s value against its U.S. counterpart. As a result, the steadiness seen in Yuan rates today (and likely next few days as well due to Thanksgiving) may be short-lived. 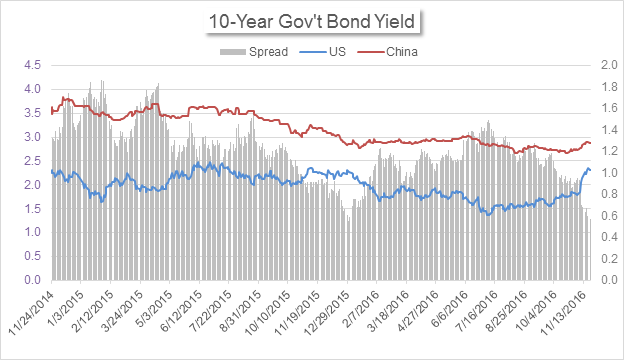 - Bank of China (BoC) signed a deal with Korea Exchange as the first commercial bank market maker for Yuan futures in Korea and as the local Yuan clearing bank. Korea Exchange introduced Yuan futures trading in October 2015. BoC’s participation in Korean financial markets will further promote Yuan’s use in the region and help to develop an offshore Yuan center in Korea.

- Hong Kong Exchange and Clearing Chief Executive Charles Li said that the Shenzhen Hong Kong Stock Connect was planned to be introduced on a Monday in November, but regulators are still working on the launch; the official notice is likely to be announced in one or two weeks.