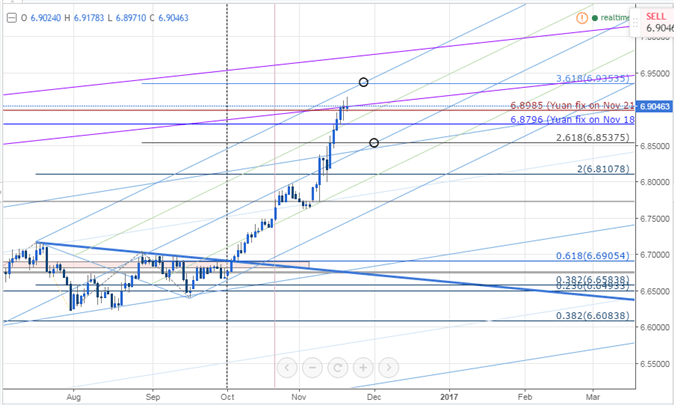 - The Yuan continued to lose against the U.S. Dollar in both onshore and offshore markets on Monday.

- Liaoning Province, a base for manufacturing firms, contracted -2.2% in the first nine months of 2016.

- The PBOC weakened the Yuan against the U.S. Dollar for the twelfth trading day in a row on Monday: the Yuan was lowered by -189 pips or -0.28% against the Dollar to 6.8985. The offshore Yuan set a fresh record low, with the USD/CNH hitting 6.9178during the session. The onshore Yuan dropped to a new 8-year low, with the USD/CNY touching 6.9011. The next resistance level for the offshore Dollar/Yuan is 6.9354 (the 361.8% extension of the previous major move and the top of a parallel).

Despite the continued losses against the U.S. Dollar, the Yuan gained against a basket of currencies for the second consecutive week, with the CFETS Yuan Index, BIS Yuan Index and SDR Yuan Index increasing +0.21%, +0.38% and +0.22% respectively. This means that the Dollar/Yuan rally was mostly driven by the Dollar strength, rather than Yuan’s weakness; compared to other currencies, Yuan’s losses against the Greenback were actually relatively small. As a result, the Yuan may continue to drop against the Dollar before the December FOMC meeting. At the same time, we discussed that the domestic liquidity shortage may impact the pace of Yuan moves. 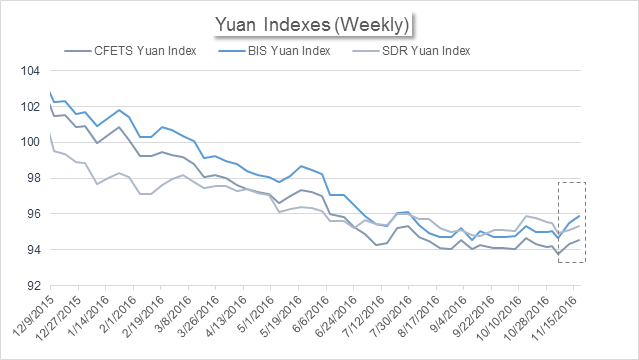 - China’s economy has maintained a steady growth of 6.7% in the third quarter; however, the prints of GDP by province released recently show uneased regional risks. Liaoning province, at the center of a default crisis, shrank -2.2% in the first three quarters following a -1.0% contraction over the first half of 2016. The province, once famous for its manufacturing industries, now is facing overcapacity, high debt, low growth and other issues. On November 16th, the State Council launched the New Northeast Revitalization Strategy in the effort of promoting the economic development in Liaoning, Heilongjiang and Jilin provinces. The main goal is to let markets play a decisive role and reduce government intervention.

- China’s demographic structure has changed fundamentally, which will continue to weigh on labor force supply, according to China Institute for Employment Research. Over the past five years, the working age population (age between 15 and 59) has dropped approximately 19.34 million. The labor force is expected to fall to 830 million by 2030 and 700 million by 2050. The changing demography will further reduce China’s comparative advantage in low-labor cost manufacturing industries and therefore require the economy to develop new momentums through reforms and industrial upgrading. Also, the rapidly rising aging population has become a major social problem to the country. These issues put additional pressure on the economy when its growth has already been slowing down amid declining global demand.

- Deutsche Bank said on Monday that the official launch day for Shenzhen Hong Kong Connect will be either December 5th or 12th. The bank expected that capitals flowing from mainland to Hong Kong through the link will exceed the other way around; from a long-term point of view, international investors will gradually increase interests in stocks listed on Shenzhen Stock Exchange.

- Goldman Sachs forecasted that mainland real estate developers and agencies will begin to lower housing prices in the coming February or March, amid rounds of tightening on the property market. It also said that the mainland real estate stocks listed in Hong Kong have already seen drops in prices, reflecting a bearish outlook for the housing market.