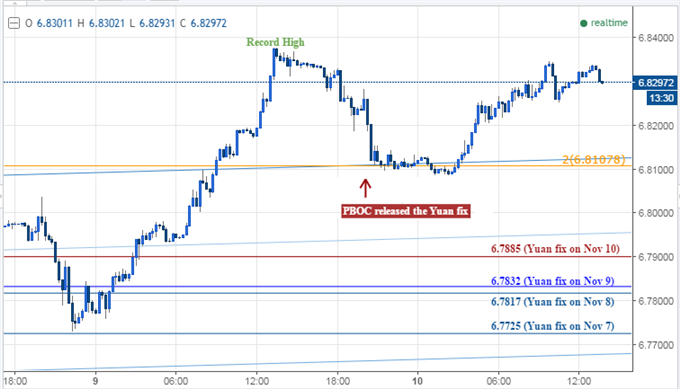 - The non-performing loans ratio of Chinese commercial banks increased +0.01% to 1.76% in the third quarter.

- China’s first state-owned enterprise that defaulted on bonds was ruled by a regional court to make payments.

- The PBOC weakened the Yuan slightly against the U.S. Dollar on Thursday, down -53pips to 6.7885. This guided level is 493 pips away from the record low that the offshore Yuan reached earlier, which is the record high for the USD/CNH. Looking forward, traders will want to continue to keep an eye on the Central Bank’s guidance as we discussed yesterday.

- The PBOC Chief Economist Ma Jun said that the current funding cost for the Yuan is higher than those of the U.S. Dollar, Euro and Yen; this is likely to be the case for many years, and therefore, financing in foreign currencies often has a cost advantage. Mr. Ma made such comments when he talked about China’s One Belt, One Road Initiative. He also emphasized Hong Kong’s role as a primary finance center for mainland investors to finance from overseas.

- The National Development and Reform Commission (NDRC) will ban real estate developers from funding for commercial real estate projects through issuing corporate bonds. For affordable housing and refugee housing projects, developers have to follow strict rules if they want to finance through bonds. Chinese policymakers have launched numerous measures over the past two months in the effort to cool the red-hot property market. In PBOC’s 3Q Monetary Policy Implementation report, the regulator has prioritized curbing asset price bubbles over the following periods.

- Baoding Tianwei Group, the first state-owned enterprise (SOE) that defaulted on bonds, was ruled by a regional court to pay over 50 million Yuan to one of its creditor, Bosera Funds. Chinese bond defaults by SOEs have been on the rise since the second quarter, amid drops in global demand, domestic production cuts as well as a shift tone from the Chinese government, which told it will no longer bail out all the troubled firms. How to solve those defaults is new not only to investors but also to regulators. Debt-for-equity swap has been introduced as a major solution but it took a couple of months before the State Council finalized and released details of the program. In addition, swapping debt to equities is currently only applied to bank loans, as creditors other than banks are less willing to use this method.

- The Chief Executive of Hong Kong Leung Chun-ying said on Thursday that the upcoming Shenzhen-Hong Kong Stock Connect will strengthen Hong Kong’s role as a global financial center and as a major hub for the offshore Yuan. On the same day, 7 funds received approvals from the Shenzhen Stock Exchange for participating in the stock link.