- The offshore Yuan finds resistance along the top side of a parallel extending off the August high.

- The Deputy Governor of the PBOC reiterated that “there is no basis for a persistent Yuan devaluation” on Monday.

- The PBOC fixed the Yuan by +217 pips or +0.32% stronger against the U.S. Dollar to 6.7641 on Monday, the largest daily increase in a month. Following the guidance, the offshore Yuan strengthened against its U.S counterpart, with the USD/CNH dropping to 6.7882 from 6.7955 within one hour after the release. The offshore pair found resistance along the top side of a parallel extending off the August high. 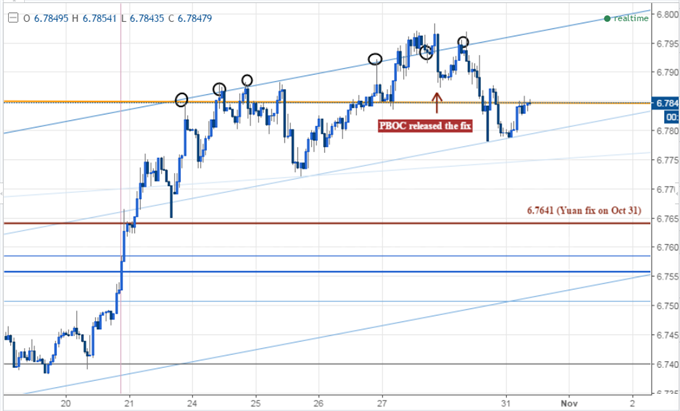 Over the past week, the Yuan extended losses against a basket of currencies. The CFETS Yuan Index, BIS Yuan Index and SDR Yuan Index dropped -0.15%, -0.03% and -0.21% respectively. However, on a monthly basis, the Yuan still gains against all the three baskets, up by +0.04%, +0.25% and +0.47% respectively; over the same span of time, the Yuan fell -1.60% offshore and -1.61% onshore. This shows Yuan’s stability against a portfolio of currencies despite the largest monthly drop against the U.S. Dollar since the de-pegging on August 11, 2015. 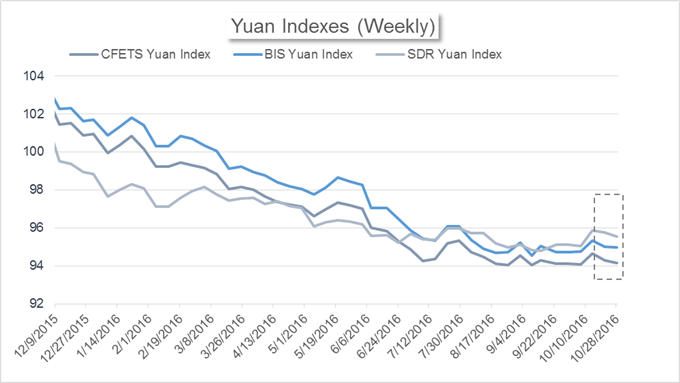 - Yuan-denominated deposits in Hong Kong increased +1.93% in October, following three consecutive drops, according to a report released by Hong Kong Monetary Authority on Monday. This indicates that after the Yuan’s official inclusion in the SDR basket, investors increased interests in holding Yuan assets. 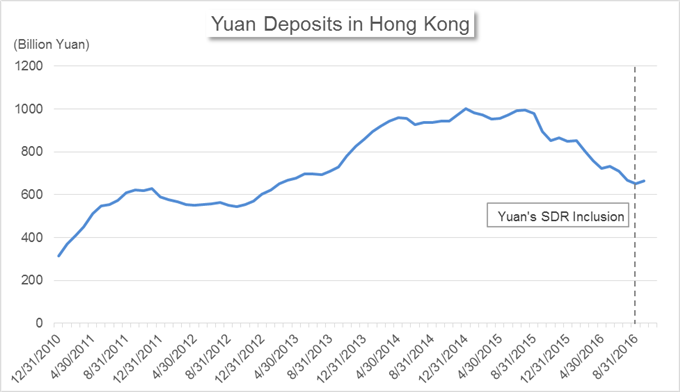 - The Deputy Governor of PBOC Pan Shenggong commented on the Yuan on October 31. He said that “amid expectations of imminent Fed rate hikes, major currencies as well as emerging-market currencies have lost [against the U.S. Dollar] lately; the Yuan weakened against the Dollar as well for the same reason. However, compared to other reserve currencies and emerging-market currencies, Yuan rates remain stable with relatively small losses. Also, the Yuan gained against a basket of currencies.” In terms of the outlook of Yuan rates, Mr. Pan told that “Yuan rates will remain basically stable, [floating] within a reasonable range. There is no basis for a persistent Yuan devaluation.”

- The Deputy Minister of Finance Zhu Guangyao said on Monday that China’s debt level is public and transparent; the leverage risk is under control in general, though the fast growing debt of companies remains one of the challenges that the country is facing. He also mentioned measures that have been implemented to reduce and control company debt risks, especially those for state-owned enterprises: Guidelines on debt-to-equity swap program have been issued; National Development and Reform Commission has set up a special committee to tackle corporate leverage.

- Hong Kong Stock Exchange CEO Charles Li said that the official launch of the Shenzhen-Hong Kong Stock Exchange will not be too close to Christmas, according to a report published on October 31st. After the official introduction, market players will have two weeks to adapt to it. On the same day, Shenzhen Stock Exchange addressed that the institution is making preparations in the effort to ensure a smooth launch of the stock link within 2016. Market players expected that the stock link will be launched on one of the following days: November 21st, November 28th and December 5th. Taking into account the above statements, the odds of the introduction in November is highly increased.