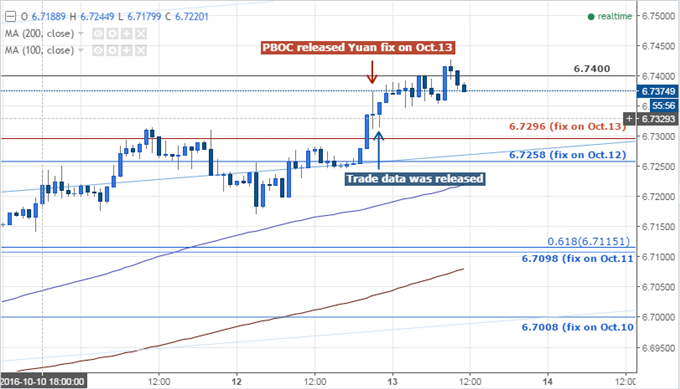 - The Japanese Yen gained against the Dollar as investors sought for safe havens amid weak China’s exports.

- The PBOC fixed the Yuan lower against the U.S. Dollar for the fourth consecutive day on Thursday after the week-long hiatus. The Central Bank weakened the Yuan by -38 pips against the Dollar to 6.7296. Following the release of the fix, a Doji candle was formed for the USD/CNH, indicating indecision: The offshore pair was already above the level of Yuan fix - some traders believed that the pair would continue to move up and others thought it should come back around the guided level. In the early portion of the New York session, the offshore Dollar/Yuan pair climbed higher and broke above the level of 6.74, the first time in 9 months.

One hour after the release of the Yuan fix, China’s Customs issued the September trade data which turned out to be worse-than-expected. In Yuan terms, exports dropped -5.6% in September on an annualized basis from a 5.9% of increase in the month prior; the print was also lower than an expected rise of 2.5% according to a Bloomberg survey. Imports expanded +2.2% in the month, lower than the 10.8% increase in August and smaller than the forecast of 5.5%.

In Dollar terms, the trade prints were even more disappointing: Exports shrank -10.0% in September and imports dropped -1.9%. As most trades are settled in the U.S. Dollar, the Dollar-denominated reads may better reflect the real imports and exports conditions. 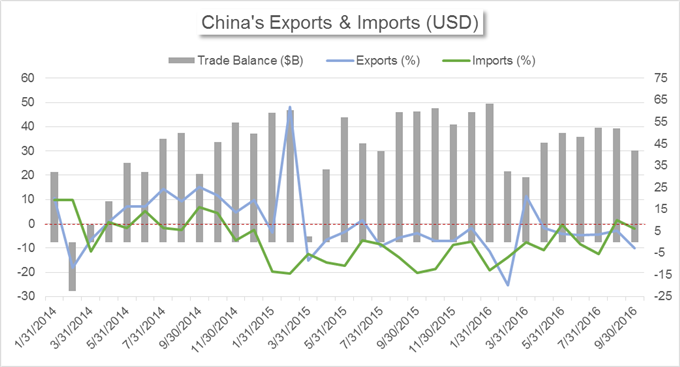 Following the release of the weak Chinese trade data, Yuan fell slightly against its U.S. counterpart, as shown in the 1-hour chart above. On the other hand, the Japanese Yen, a safe haven currency, gained against the greenback amid increasing concerns on the Chinese economy. The Yen pulled back from a 10-week low, with the USD/JPY falling from 104.25 to 103.72 within one hour following the release of the Chinese trade prints. This is not the first time that investors seek safe-havens in Yen assets when Chinese markets turn choppy. Also, moves in Chinese Yuan may also bring some element of pressure into global equity markets. 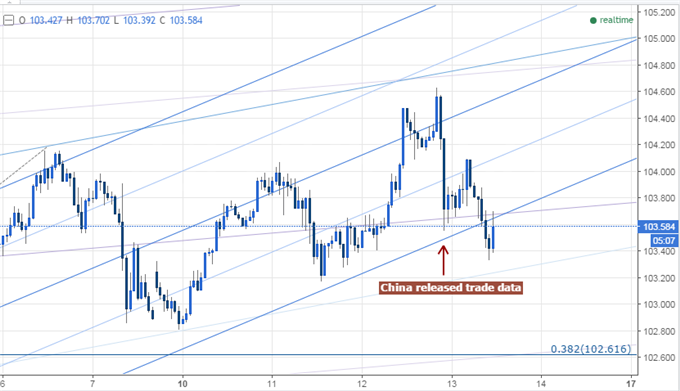 Another key gauge that may impact Yuan rates is the offshore borrowing cost of the currency in Hong Kong, HIBOR. Over the past two days, the HIBOR O/N has been in an upward trend and touched 3.8422% on Thursday, the highest level in three weeks. An increased funding cost of the Yuan may slow down the pace of Yuan shorts, as what was seen in mid-September when HIBOR O/N hit the second-highest level on record, and thus, traders will want to continue to keep an eye on the rates. 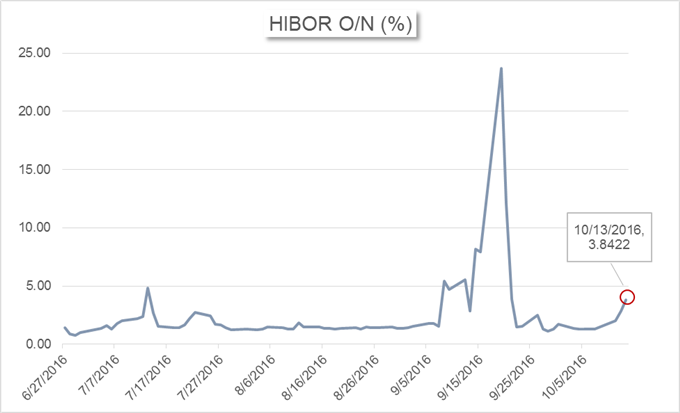 - China Securities Regulatory Commission told that they have approved two new foreign institutions to participate in RQFII program in September, according to a statement issued on October 13th. The RQFII regime allows qualified overseas institutions to directly invest in Yuan-denominated assets in mainland China, under China’s current capital controls policy.

- The State Council issued detailed rules to curb the online financial risk on Thursday. Multiple state agencies will work together to tighten regulations on online financial activity, including on the fast expanding peer-to-peer (P2P) lending. Also, regarding the overheated housing market, the regulator clarifies that real estate development firms and agencies are not allowed to use online platforms to engage in financial business without relevant licenses. Easy borrowing from unauthorized real estate companies have fueled rises in property prices.