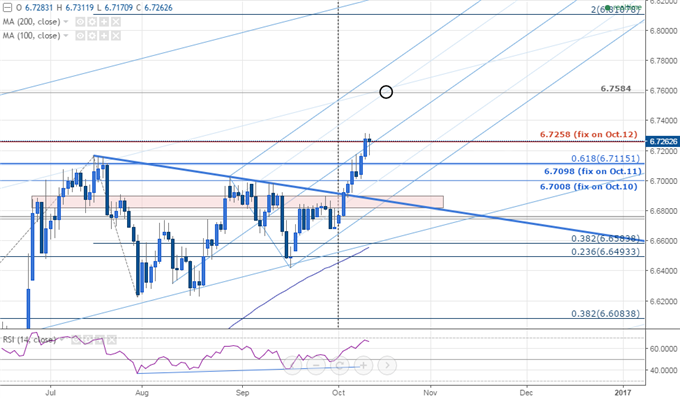 - The PBOC weakened the Yuan for the third straight day on Wednesday after the week-long hiatus.

- Multiple firms with a large mount debt have entered into bankruptcy restructure; the overall credit risk is increased.

- The PBOC set the Yuan weaker against the U.S. Dollar on Wednesday, the third consecutive day after a week-long holiday. The Central Bank guided the Yuan by -160 pips or -0.24% lower against the U.S. Dollar to 6.7258, marking a new six-year low. The offshore USD/CNH traded around the Yuan fix during the session. As we discussed yesterday, technical levels are in focus for the pair in the near-term.

The PBOC also tightened the onshore liquidity for the third day in a row. On Wednesday, the regulator reduced a net of 165 billion Yuan cash, following a net withdrawal of 90 and 100 billion Yuan on Monday and Tuesday respectively. Despite the withdrawals, Yuan’s onshore borrowing rates either continued to drop or remained little changed. The SHIBOR O/N, 1-week, 2-week and 1-month fell -0.30, -1.10, -0.70 and -0.32 respectively. This indicates relative low demand in onshore Yuan liquidity. 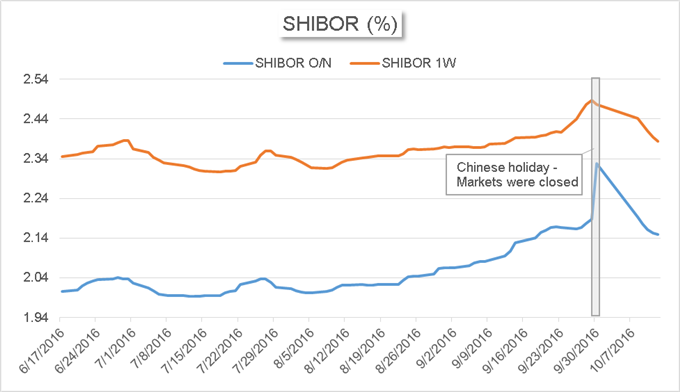 - China’s Premier Li Keqiang said that the Chinese government supports Macau to become a key center for Yuan settlement. Also, the central government will promote the creation of a fund headquarters in Macau set up by China and Portugal. Macau, a special administrative region of China, was ruled by Portugal for more than a century until 1999. As a result, the region is considered to be a gateway between mainland China and the Western world, similar as Hong Kong. The establishment of a Yuan clearing center for Portuguese-language nations in Macau is expected to further promote Yuan’s global use.

- Chinese firms’ credit risks have been increasing of recent, according to a report issued by CITIC Securities. In late September, LDK Solar, a solar wafer producer, was forced to enter into the bankruptcy restructuring process following a ruling from the local state court. At the same time, Guangxi Nonferrous Metal Group failed to submit a restructure plan within six months and thus has been declared bankrupt, making it the first bankrupt issuer in China’sinterbank market. Another troubled firm, Dongbei Special Steel, entered into the bankruptcy process on October 10th. Bohai Steel Group, also in the debt crisis, released a restructure plan in the effort to reduce its 192 billion Yuan of debt; however, the Chinese securities believes that the plan is not practical and likely to be rejected by creditors.