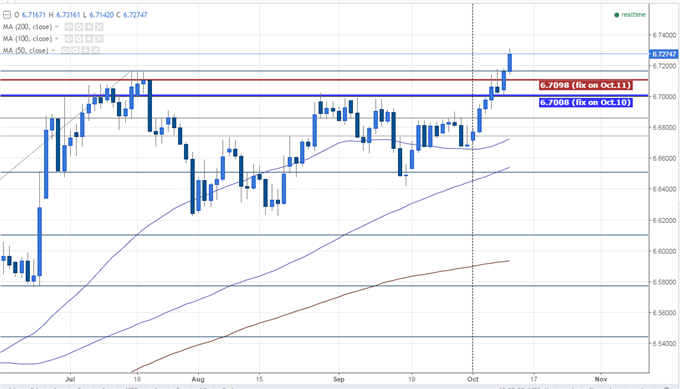 China's Market News: Dollar/Yuan - Next Levels to Look For

- The PBOC continued to weaken the Yuan fix on Tuesday, setting a new six-year low.

- China’s Premier Li said that the country’s debt risks are under control.

- The PBOC weakened the Yuan fix for the second consecutive day: the Yuan was set by 90 pips lower against the U.S. Dollar to 6.7098 on Tuesday, a new six-year low. However, in an immediate response to the daily fix, the offshore Yuan strengthened against its U.S. counterpart: the USD/CNH dropped to 6.7200 from 6.7246 within the first 15 minutes after the release of the Yuan fix. The pair recovered later and traded around 6.7274 at 12:30 pm EDT.

At the same time, the onshore Yuan has dropped to the lowest level against the U.S. Dollar since September 2010: the USD/CNY dipped 6.7180 in the late portion of the Asian session on Tuesday. 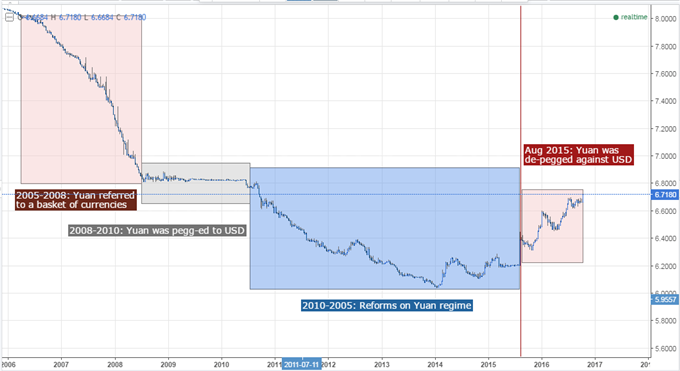 The Yuan fix, onshore and offshore Yuan rates all have broken the key psychosocial level of 6.70. However, it may be too soon to look for levels at or above 6.80 before the PBOC’s priority become clearer, amid multiple ongoing issues inside the country.

In the near term, some technical levels are worth to keep an eye on: the previous resistance level of 6.7165 could become the new support for the USD/CNH. Also, according to our Currency Strategist Michael Boutros who specializes in technical levels, 6.6819 and 6.7585 are key levels for the offshore Yuan rate as well.

- China’s Premier Li Keqiang said that China’s debt risks are under control in general; the major issue is the debt structure. Also, the economy in the third quarter was better than expected. He pointed out that the jobless rate in 31 big cities in September has dropped below 5%, the first time in years.

- Shenzhen Stock Exchange, Hong Kong Stock Exchange, China Securities Depository and Clearing Corporation and Hong Kong Central Clearing and Settlement signed agreement regarding the upcoming stock link between the two regions on Tuesday. This marks one step further towards the official launch of the long-anticipated program.