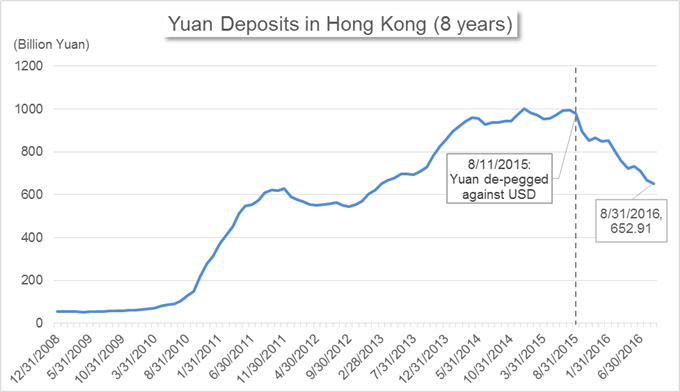 - Yuan deposits in Hong Kong in August dropped to the lowest level since February 2013.

- The PBOC will provide moderate liquidity and guide credit and financing to grow at an appropriate rate.

- Yuan-denominated deposits in Hong Kong dropped -2.1% to 652.9 billion Yuan in August from the month prior, according to Hong Kong Monetary Authority; this is the lowest level since February 2013. The deposits gauge can be used as a market sentiment indicator for the Chinese currency in its largest offshore center.

The level of Yuan deposits in Hong Kong is mostly consistent with moves in Dollar/Yuan rates. When the Yuan rose against the U.S. Dollar in early years, individuals and companies increased their Yuan holdings as well. After Yuan’s de-pegging, the currency has come under devaluation pressure. As a result, Hongkongers began to reduce their Yuan holdings. 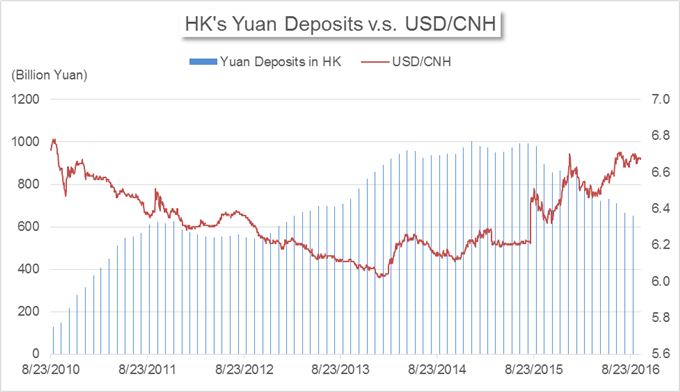 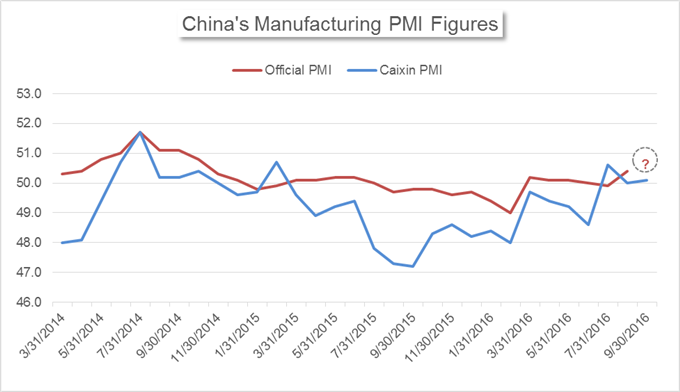 - The PBOC said that Yuan’s official inclusion in SDR basket will ‘contribute to the stability of Yuan exchange rates’, according to a statement issued by the regulator on September 30th. Following Yuan’s official entry, it is expected that the overseas demand in Yuan-denominated assets will increase and the corresponding capital inflows will help to steady Yuan rates. The full text can be found here.

- The PBOC’s Monetary Policy Committee hosted the third quarter meeting and released policy targets for the following periods: the Central Bank will maintain prudent monetary policy and flexibly use multiple policy tools. The regulator will provide moderate liquidity and guide credit and financing to grow at an appropriate rate. In terms of exchange rates, the Central Bank will maintain Yuan rates stable within a reasonable range.

This week PBOC has been tightening onshore Yuan liquidity, which is unusual before a major holiday. We discussed that it signals the regulator continues on its tweaked short-term credit strategy. PBOC’s statement released on Friday confirms this intention. China’s home loans have been increasing at a rapid rate and contributed to the largest portion of New Yuan Loans. At the same time, financial institutions have taken advantage of cheap short-term funds provided by the Central Bank and purchased longer term bonds. Both activities increase the risk of price bubbles. As a result, the regulator set managing liquidity and credit growth as one of the major targets over the following periods.

- China’s securities regulator will remove restrictions on asset allocations under QFII and RQFII programs. Qualified foreign institutional investors may purchase Chinese stocks, bonds and other assets through these programs. Previously, the securities regulator issued guidance requiring QFII investors to place at least 50% of total assets in stocks and hold no more than 20% in cash. Under the new rule, investors may make their own decisions on asset allocations.