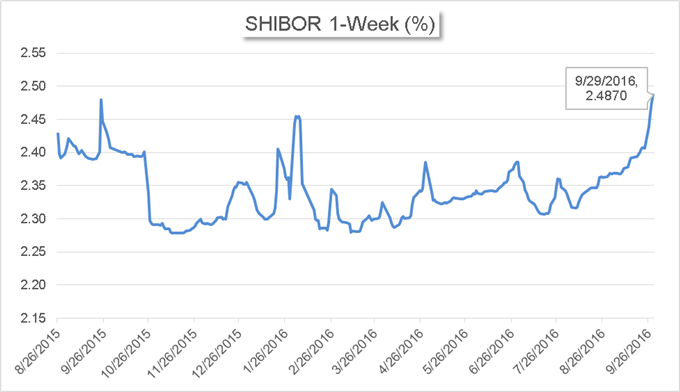 - The Yuan fix was little moved on Thursday, while the 1-week SHIBOR rose to the highest level in a year.

- PBOC’s adviser commented on Yuan rates as well as the balance between economic growth and reforms.

At the same time, the onshore Yuan liquidity saw further tightened. The overnight, 1-week, 2-week and 1-month funding costs for the Yuan in Shanghai interbank market all increased on Thursday. In specific, the 1-week SHIBOR hit 2.4870%, a new high in a year.

Chinese onshore markets will close from October 1st to 7th for the National Day holiday. Normally, the Central Bank will increase cash injection ahead of a major holiday in the effort of easing the liquidity shortage. However, this week the Central Bank has already withdrew a net of 370.1 billion Yuan cash from the market.

This may hint at two intentions from the regulator: A) To stabilize onshore Yuan rates by increasing the borrowing cost, ahead of its official entry to the SDR basket. B) To continue on its tweaked short-term credit strategy, amid the increasing risk of price bubbles in Chinese financial markets.

- People’s Bank of China’s adviser Fan Gang said that in early years, a large amount of capital flew into China and caused Yuan’s surges at that time; Yuan’s devaluation in recent years is a correction. Also, as the Yuan tracks against a basket of currencies, when currencies in the basket devalue, the Yuan should move lower as well.

Mr. Fang also commented on recent declines in the growth of private investment. He said that production cuts in the private sector may have contributed to the drops but is not the direct reason. The economic cycle may weight more on private investment. As a result, he emphasized the importance of maintaining a moderate economic growth while the country is spending lots of efforts on reforms.

Mr. Fang is a member of the PBOC’s Monetary Policy Committee, which is a consultative body for the Central Bank. Members in the Committee include PBOC’ Governor and Deputy Governors, and top officials from other state entities. The full list of the members could be found here.

- China’s FX regulator denies a report that ‘Deutsche Bank is discussing with SAFE in order to move the money gained from selling shares of Huaxia Bank to overseas’, according to an official statement released by the regulator on Thursday. SAFE told that there is no policy impediment on this matter: Under the current FX regulation, foreign institutions selling their holdings of Chinese shares may apply for foreign exchange transactions at a commercial bank. The transactions can be completed after the commercial bank confirms the authenticity of the deal and conducts a compliance audit. There is no need for a pre-approval from SAFE.