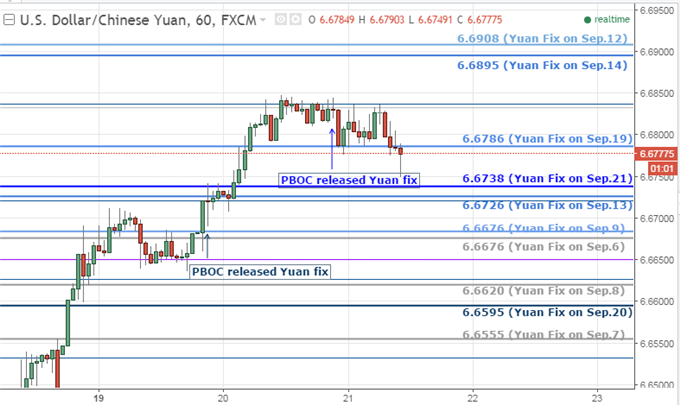 - Yuan rate shows indecisiveness ahead of FOMC, despite the guidance from the PBOC.

- Chinese stock index traded in the narrowest range in 14 years as investors are await for Fed’s decision.

- The PBOC designates Bank of China’s New York Branch as the clearing bank in the U.S.

The PBOC guided the Yuan weaker against the U.S. Dollar on Wednesday ahead of the Fed rate decision. The Yuan fix was set by -143 pips or -0.21% lower to 6.6738. Following the release of the fix, a Doji candle for the USD/CNH was formed again, reflecting indecisiveness, as what were seen over the past few days. The pair has been consolidating in a narrow range as it approaches to the release of the Fed rate decision.

- Shanghai Composite Index remained flat on Wednesday as Chinese investors are await for the Fed rate decision as well. The Index rose +0.10% over the session, with a tight trading range of less than 15 points. On Tuesday, the Index traded in an even tighter range of 12 points or 0.395%; this is the smallest range on a percentage basis in 14 years.

- China’s Central Bank designates Bank of China as the official Yuan clearing and settlement bank in the U.S. This marks a milestone for the Yuan in its globalization process. Beginning in 2003, China started to set up Yuan clearing and settlement banks in major countries and regions across Asia and Europe. In 2014, the first clearing bank in North America was established in Toronto, Canada. In 2015, Yuan clearing banks were launched in South Africa and South America. However, a major piece was missing in Yuan’s framework of internationalization - a clearing center in the U.S., one of the most important global financial centers. This June, during U.S. Treasury Secretary Jack Lew’s visit in China, PBOC’s released a plan of setting up a clearing bank in the U.S..

Yuan’s clearing and settlement bank in the U.S. will not only promote the currency’s use in the North American region, but also signals that Yuan’s offshore institutions have expanded to and covered major countries. This has both practical and symbolic meaning for the Yuan while it will officially join the SDR basket in less than two weeks.

Bank of China’s New York Branch is the largest Chinese financial institution in the U.S. with over $50 billion assets. Settlements of international payments made through the branch took up roughly a quarter of the total US-China trade.