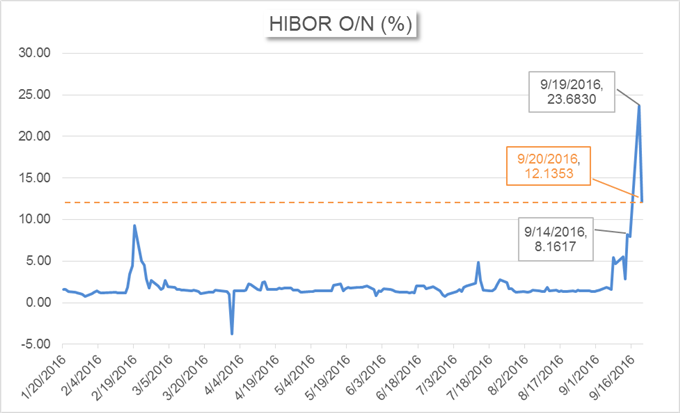 - The borrowing cost of offshore Yuan dropped on Tuesday but remained at relative high levels.

- China’s Premier Li Keqiang reiterated that there is no basis for sustained devaluation in the Yuan.

- The overnight borrowing cost of the offshore Yuan dropped on Tuesday after the rate hit the second-highest level on record a day ago. The HIBOR O/N fell 11.5477% to 12.1353% on the day. Despite the drop, the key measure of Yuan’s borrowing cost in the offshore market remains beyond an average level: The average HIBOR O/N in August was 1.41% and the average over the past 12 months was 2.56%.This indicates that the tightened liquidity in the offshore Yuan has not fully eased and the funding cost for shorting the currency remains relatively high.

On Tuesday, the PBOC guided the Yuan by +191 pips or +0.29% higher against the U.S. Dollar to 6.6595. Following the release of the reference rate, a Doji candle was formed, indicating indecision from traders. Similar moves were seen on September 12th and 13th after the PBOC released the Yuan fix. This indicates that the PBOC’s impact to the offshore Yuan rate through the reference rate was diminished over the past few days. 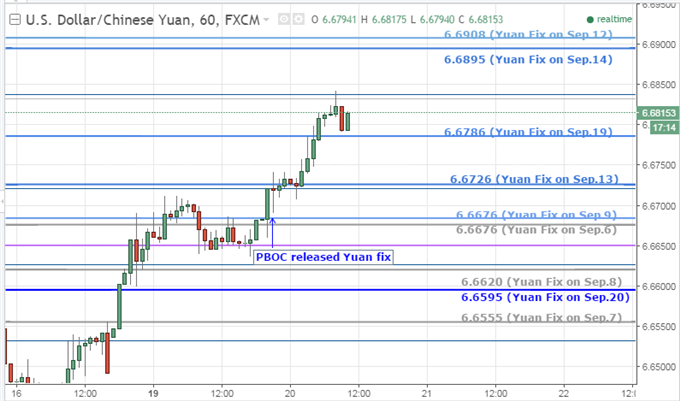 From September 14th to 19th, the offshore Yuan (USD/CNH) traded below the onshore Yuan (USD/CNY) and the daily fix, which was uncommon. This was most likely driven by the tightened Yuan liquidity in the offshore market. On September 20, the USD/CNH rose above USD/CNY and the daily fix. Yet, with relatively high funding cost of the offshore Yuan, the USD/CNH pair may retrace around its current levels rather than spike higher. Next major driver for the Dollar/Yuan is the Fed rate decision to be released on Wednesday, which could lead to major breakouts of the pair. 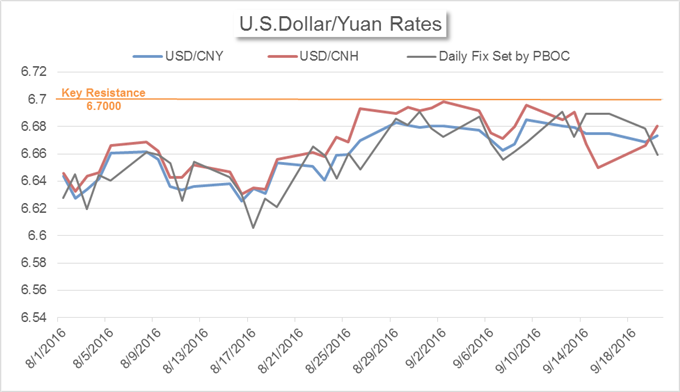 - China’s Premier Li Keqiang said that there is no basis for sustained devaluation in the Yuan. Yuan exchange rates will remain stable within a reasonable range. In terms of the Chinese economy, he told that a steady upward trend has been seen. Premier Li made these comments at the meeting with U.S. President Obama on September 19th during his trip to the UN summit.

- A debt-to-equity swap deal for Sinosteel Corporation was approved by regulators. This is the first approved deal of such kind for a state-owned enterprise (SOE). It is expected that the SOE will swap approximately half of its 60-billion-Yuan debt into equities. Chinese policymakers introduced the swap program early this year as a major solution to managing companies’ rising debt load; however, some investors raised concerns over potential risks of the program. Sinosteel’s deal could set an example for the program and more deals for SOEs may be seen over the following periods.