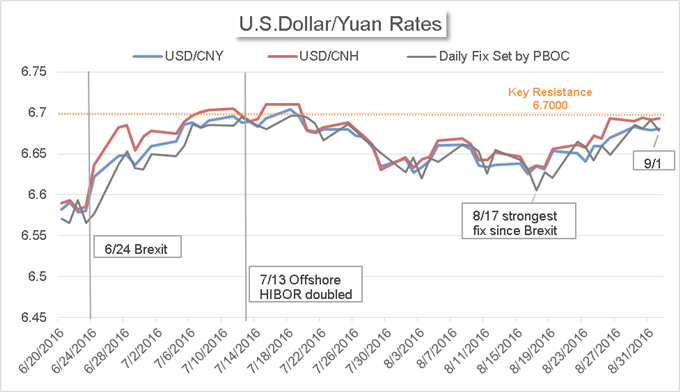 - The gap between onshore and offshore Yuan rates widened following the PBOC’s guidance.

- The PBOC strengthened the Yuan by +124 pips or +0.19% against the U.S. Dollar on Thursday. Both onshore and offshore Yuan rates moved higher following the release but the spread between the two rates elevated. As of 10:45am EDT, the gap has widened to 154 pips from 77 pips before the release of the daily fix. 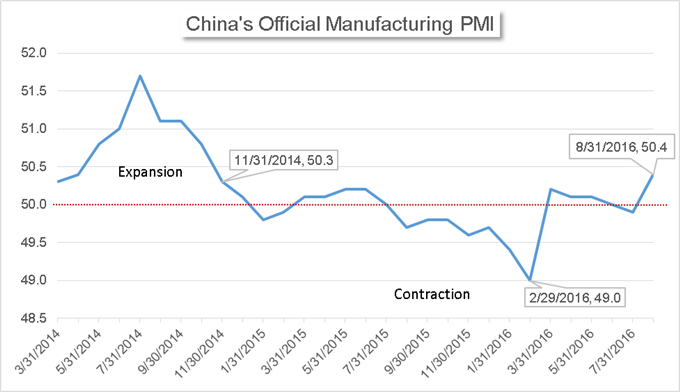 Among the sub-indexes of the PMI measure, production and new order indexes increased in August, indicating both supply and demand in the manufacturing sector has improved. This is a positive sign for the traditional sector, as in the short-term, cutting production may be a solution for firms to survive in the economic winter. However, eventually they need to expand their business in order to develop and succeed; this will require improved demand.

At the same time, the Caixin Manufacturing PMI print released 45 minutes later moved into the opposite direction of the official read. The August Caixin PMI print fell to 50.0 from 50.6 in the month prior. This is not the first time the two PMI reads are contradictory to each other. Last month, Caixin PMI was higher than the official PMI. This is likely caused by the differences amongst surveyed companies that are included in the two reports: official PMI report covers large, medium and small-sized companies, while Caixin PMI focuses on small and medium-sized companies. 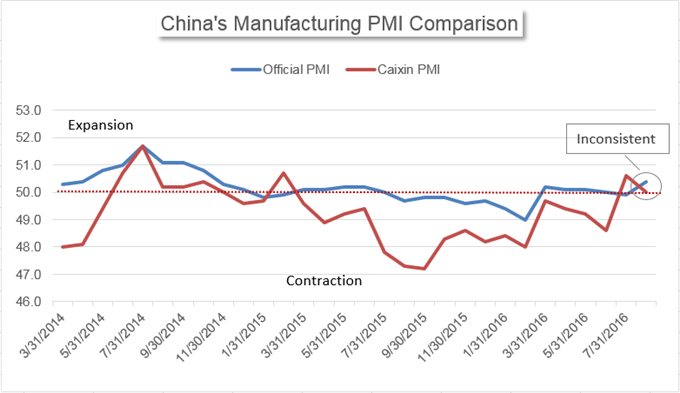 - The Deputy Governor of the PBOC Yi Gang commented on Yuan rates at a press briefing for the G-20 meetings on September 1st. Mr. Yi said that the volatility in the Yuan is lower than other reserve currencies; Yuan rates have been floating within a reasonable range and remain relatively stable. He also addressed that China’s Central Bank will maintain a market-oriented exchange rate regime and continue to improve the system.

G-20 meetings are being held in Hangzhou, China, beginning on August 31st. The most important meeting for traders to keep an eye on is the G-20 Leaders Summit that is scheduled on September 4th and 5th.