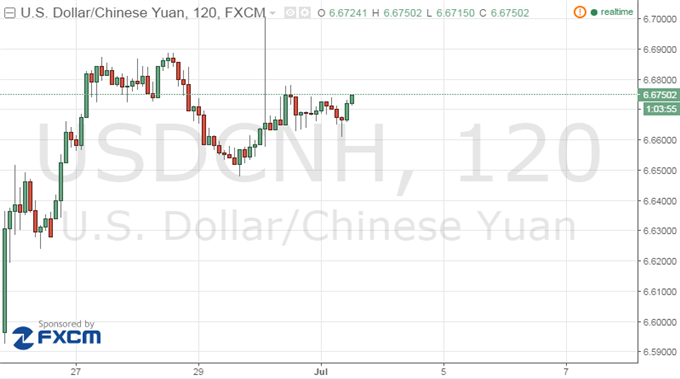 The onshore Yuan (CNY) lost -0.64% against the US Dollar to 6.6575, as of 10:30 am EDT on Friday. This is the lowest onshore rate since December 2010. The offshore Yuan (CNH) weakened by -0.43% against the US Dollar to 6.6630, the weakest level since the Yuan was de-pegged against the Dollar in August 2015. The British Pound continued to drop against the Yuan: the onshore GBP/CNY dropped -0.96% while the offshore GBP/CNH fell -1.03%. Among the three Yuan indexes that represent a basket of currencies, the CFETS Yuan Index and the BIS Yuan Index dropped over the past week: on June 30th, the CFETS Yuan Index lost -0.28% to 95.02 while the BIS Yuan Index dropped -0.41% to 96.09. The SDR Yuan Index, on the other hand, rose +0.57% to 95.76 on June 30th. This indicates that the Yuan Chinese currency is more stable to a basket of currencies than to any single currency, which meets the PBOC’s exchange rate target. Looking into next week, post-Brexit discussions will likely continue to dominate the headlines and preempt moves in FX markets. Key economic data which includes US Non-farm Payrolls and China Caixin PMI and foreign reserves gauges will add considerable potential for volatility to Dollar/Yuan rates as well.

Bank of England Governor Mark Carney’s speech on a potential interest rate cut this summer sent the British Pound lower on Thursday. Moves similar as this in the coming week will continue to affect Yuan’s position against a basket of currencies. In turn, this could impact Dollar/Yuan rates. The PBOC has set up a system designated to determine the daily fixing: There are two factors in the system: the closing price of USD/CNY in the last session and the move in the Yuan Index in the last session. For example, on day T the closing price of the USD/CNY was 100 higher than the daily fix. At the same time, the Yuan Index moved stronger, driven by the weakness of other currencies in the basket. In order to keep the Yuan relatively stable to the basket, the PBOC will determine the move needed in the USD/CNY rate on day T+1; such as, 150 pips weaker. Then on day T+1, the Central Bank will release a daily fixing 250 (=100+150) pips weaker than the fix on day T.

The PBOC’s moves over the past week have given us some clues as to how the Central Bank may distribute the pressure on Yuan between these two components. On June 30th, the Central Bank issued an official announcement regarding the recent volatility in Yuan. It said that “the Chinese Yuan has been devalued against the US Dollar to some extent but remained relatively stable to a basket of currencies”. This indicates that PBOC’s top priority is the Yuan’s stability to the basket rather than to the Dollar. We can also tell from the numbers: from June 24th to July 1st, the onshore Yuan weakened by -1.27% against the Dollar while the Yuan Index only dropped -0.28%. We previously discussed the currencies in the Yuan basket last week. Looking forward, traders will want to keep a close eye on moves from BOE, ECB and BOJ as they will affect those currencies with large weightings in the Yuan index.

Also, numerous key U.S. data points will be released next week that could directly impact the Dollar/Yuan. The most important of these is the Non-farm Payrolls (NFP) print for June scheduled to be released on July 8th. The big miss in the May NFP print sent the offshore Yuan higher by +0.9% to 6.5360, the strongest level since May 12th. The consensus forecast for the June print is 180k from Bloomberg. Other major indicators include US Non-manufacturing Composite figure for June and Durable Goods Orders for May. On China’s side, Caixin News will release China’s June PMI Services and Composite figures. The official Manufacturing PMI issued by China’s Statistics Bureau has dropped to 50.0. Compared to the official gauge, Caxin’s PMI tracks more smaller-scale private firms. The PMI gauges are likely to have limited direct impact to the Dollar/Yuan rate but a considerable weakened condition may lead to discussions on whether China’s Central Bank should provide additional monetary support, coupled with the global turbulence.