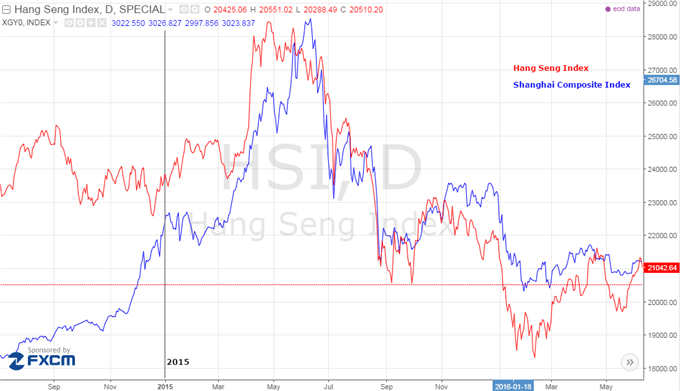 Brexit May Impact Mainland through Hong Kong on Business, Equities

- The unique setup between China, UK and Hong Kong links all three economies.

- The volatility in Hong Kong shares could spread to the mainland equity market very quickly.

The impact of a potential Brexit to China may be underestimated if one was only counting the direct and obvious connections. China’s trade with the UK is much lower compared to China’s trade with the rest of the EU: China’s imports from the UK only make up 1.1% of China’s total imports. China’s exports to UK account for 2.6% of China’s total exports. On the other hand, China’s imports to and from the EU makes up approximately 17% of all imports/exports out of the country. Also, China’s domestic capital markets are not yet fully opened, and this has limited direct investments from China to the UK and the other way around. However, Hong Kong, a special administrative region of China, is not only susceptible to any direct hits from Brexit, but could also transfer the impact to mainland China.

Hong Kong was ruled by the British government for more than a century before China regained control in 1997. Due to this history, Hong Kong has strong links with both mainland China and the UK.

Brexit could hurt the considerable amount of Hong Kong investors who hold UK assets. Hong Kong’s richest man Li Ka-Shing warned on Tuesday that the Brexit would have a ‘detrimental’ effect and urged British people to vote against it. The tycoon owns phone services, ports, electricity distribution as well as cosmetics businesses in the UK. A weaker Pound against the Dollar, driven by Brexit, could hurt the profits of the Billionaire’s investments denominated in British Pounds. Li is not the only one who invests in UK. In fact, Hong Kong investors, including the rich and the not-so-rich, often invest in the UK in real estate and stocks. Due to the UK’s earlier administration, many Hong Kong residents have British citizenship, which allows for considerable ease when investing in the UK.

On June 21, Hong Kong’s Chief Executive, Leung Chun-Ying, also warned the impact of Brexit ‘could be big to the UK as well as to Hong Kong’. There would be two types of impacts to the Hong Kong region: One it may directly impact the real economy. The Chief Economist of Hong Kong Trade Development Council, Pan Yongcai, said on June 17th that the region may take considerable impact from the UK should voters decide to leave the EU. Also, according to the UK government, about 120 British companies have regional headquarters in Hong Kong and another 200 have regional offices there. These British companies could be greatly influenced by the Brexit decision both onshore as well as in Hong Kong.

More importantly, Hong Kong’s financial industry is closely connected with the UK. For example, HSBC, Hong Kong and Shanghai Banking Corporation, is a British multinational bank and the largest financial institution by assets in Europe. The bank was named after Hong Kong and Shanghai, where the bank was originally operated when set up. Now Hong Kong is the main profit-generating hub for the bank. In early February, HSBC even considered moving its headquarters to Hong Kong. HSBC, Standard Chartered and other UK-exposed banks and companies listing on the Hong Kong Stock Exchange will be most vulnerable if the Sterling depreciates on the back of a vote to leave the EU.

Hong Kong’s equities have already seen weakness due to turbulence from the mainland Chinese market. If those shares are hurt by the Brexit decision, they could drag down the entire Hong Kong market. In turn, the mainland Chinese equity market could be affected as well, as the correlation between the two equity markets has significantly increased since last year. The Shenzhen-Hong Kong Stock Connect, introduced in August 2014, allows investors in the two markets to purchase stocks in the other market. Also, Mainland and Hong Kong regulators are planning to launch a similar system in the near term in the effort of connecting the Shanghai and Hong Kong stock exchanges. This will further increase the connection between the two markets.

To get more in-depths about Brexit impacts to the Western markets, read our Currency Analyst, James Stanley’s articleFour Markets of Extreme Vulnerability as We Approach the Brexit Vote.