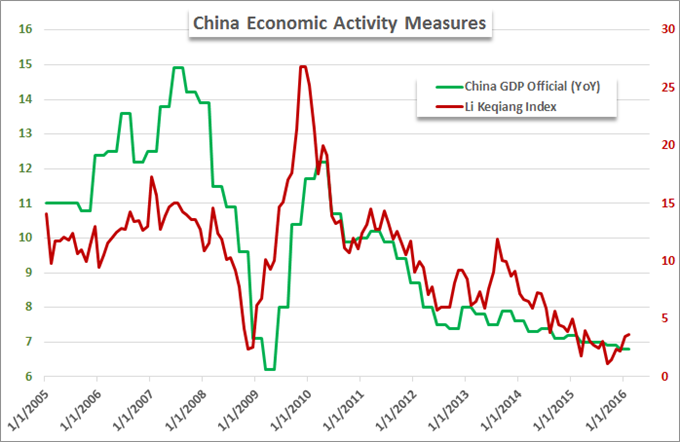 - The Li Keqiang Index moves along with the official GDP number.

- How to use the Index to predict 1Q GDP figure.

China’s official 1Q 2016 GDP figure due on Friday morning is a key event risk for global investors. The economy is expected to have grown 6.7% in the first quarter according to Bloomberg. In addition to this consensus from financial institutions, traders will want to take a look at the Li Keqiang Index and to get a sense of how top Chinese officials are setting their forecast.

The Li Keqiang Index is named after Li Keqiang, China’s Premier. There are three components included in the index: the railway cargo volume, electricity consumption and new loans issued by banks. It was reported in 2010 that Li Keqiang, then party secretary of Liaoning province and now China’s Premier, preferred to use this aggregate indicator to get a more accurate picture of the broader economy.

As most of the monthly measures included in the Li Keqiang Index have already been released, they can be used to predict the Chinese GDP in the first quarter. The Li Keqiang Index in the first two months of 2016 produced readings of 3.47 and 3.63 respectively compared to 4.97 and 3.7 for the same months a year ago. The March Index has not been published; but its 2015 counterpart was 1.81.

In particular, China’s railway cargo volume dropped significantly in the first quarter of 2016. The volume of rail freight transport declined -9.43% to 788 million tons. The New Yuan Loans number increased by 70.7% to 2510.0 billion yuan in January from a year ago; it dropped 28.8% to 726.6 billion yuan in February on a yearly basis. The March figure due this week is expected to drop 6.8% to 1100.0 billion yuan from a year ago. In terms of electricity consumption, China’s National Development and Reform Commission said earlier today that the total electricity consumption increased by 3.2% in the first quarter to 1.3 trillion kWh from a year ago.