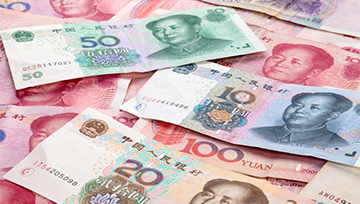 Why It Is Important for Traders

The Yuan’s overnight borrowing rate in Hong Kong (CNH HIBOR) turned negative for the first-time on March 31. Also in the headlines recently, Chinese state-owned brokerage, Guoseng Hong Kong, was in danger of becoming the first State-Owned Enterprises (SEO) to default in Yuan-denominated bonds in an offshore market. In order to understand the concerns these recent events pose for Chinese and global markets, traders will want to take a look at the linked exchange rate and financing systems between the Hong Kong Dollar and the Chinese Yuan.

A Brief History of Hong Kong and Mainland China

Hong Kong is a peninsula located along the southern coast of China. Its adjacent continent is normally referred to as ‘mainland China’. Hong Kong was part of China’s territory until 1842, when it became a British colony. In 1949, the People’s of Republic China (P.R.China) was established and took over control of the mainland. In 1997, the P. R. China (hereinafter referred to as China) took over control of Hong Kong from the British government following more than a century of rule.

This authority change over the past two hundred years led to a unique economic and financial situation between Hong Kong and mainland China - including monetary policy and exchange rate disparities.

After China took over the sovereignty of Hong Kong in 1997, Hong Kong immediately became an autonomous administration territory under the “one country, two systems” principal. This allows Hong Kong to maintain its currency, the Hong Kong Dollar, and its central bank, the Hong Kong Monetary Authority. Both were established during the British ruling period. On the other hand, in mainland China, The People’s Bank of China serves as the central bank and the official currency is the Chinese Yuan.

The foreign exchange rate regimes for both currencies have changed over time. The HK Dollar was first pegged to the British Pound in 1935 and then became free floating in 1972. In 1983, the HK Dollar was reset to a peg with the US Dollar and has remains so.

The Chinese Yuan was created in 1949 when the country was set up. After the country introduced an “opening up” strategy in the late 1970s, a double exchange rates system was introduced for the currency. In 1994, the two exchange rates were unified and the Chinese Yuan was set to a peg with the US Dollar. In 2005, China’s Central Bank removed the peg and let the Yuan refer to a basket of currencies. After the 2008 global financial crisis, the Yuan was pegged to the US Dollar again in an effort to stabilize the economy. On August 11, 2015, the Central Bank introduced additional reforms on the Yuan and returned the currency to a basket of currencies. 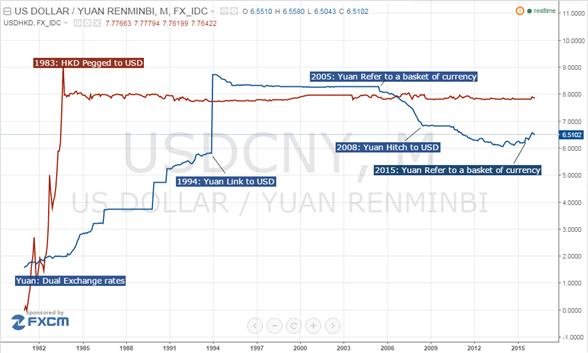 The Two Systems Remained As Two

The Hong Kong Monetary Authority (HKMA) set a target rate for USD/HKD at 7.8000 and a tight floating band for the pair between 7.7500 and 7.8500. When the Chinese Yuan was de-pegged from the US Dollar on August 11, 2015; the Hong Kong Dollar moved lower against the US Dollar on the same day but then retraced the losses quickly. By the end of the month, the USD/HKD has returned to the low end of the band where it was before the Yuan’s adjustment – and notably despite the fact that the mainland stock market had plunged over 11% during the month. 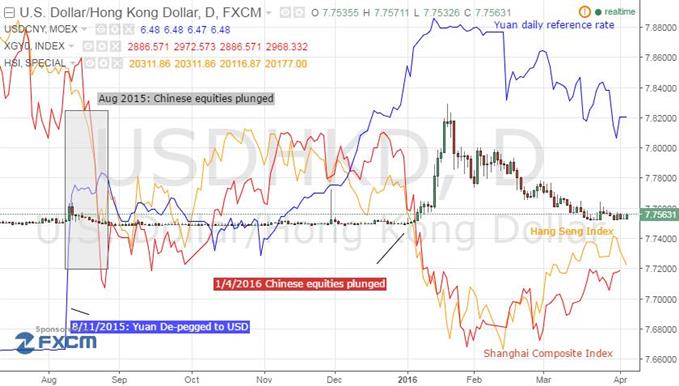 Are The Two Systems Becoming One?

In January 2016, the two currencies saw increased links. Yuan’s offshore overnight borrowing rate, HIBOR, soared to 66.8% on January 12 after China’s central bank (PBOC) stepped in against excessive Yuan short speculations by tightening liquidity at Hong Kong commercial banks. Investors' concerns on whether the Hong Kong Dollar can hold the pegged system against the U.S. Dollar emerge, following the volatility at Yuan's offshore market, coupled with another plunge in Chinese stocks.

In response to the market speculation, Hong Kong Monetary Authority said on January 27 that the regulator will protect HKD’s linked exchange rate regime.

Through March, the USD/HKD gradually fell back towards the bottom of its range. However, the pressure on the linked exchange rate regime hasn’t permanently vanished.

For one, as discussed above, Hong Kong’s financial markets are highly impacted by mainland China. The Yuan exchange rate as well as China’s equity market remain is in a state of high volatility.

More importantly, Hong Kong faces a fundamental problem if it retains a linked exchange rate regime. As an important intermediary between Mainland China and the rest of the world, its FX policy approach may conflict with the Yuan’s increasingly market-dependent status.

Also, as the US Fed is likely to raise interest rates again in 2016 and then send the US Dollar higher, the linked Hong Kong Dollar would become more expensive than un-pegged currencies including the Chinese Yuan.