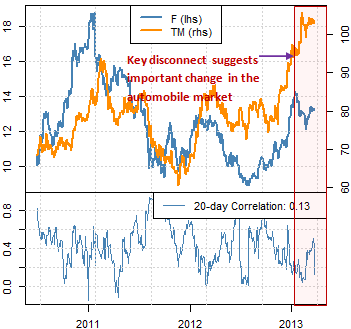 Will Ford Fall? Toyota Surge? Protect Your Portfolio With This Tool

Ford’s stock price has fallen by as much as 10+ percent from recent multi-year peaks, but Toyota’s stock price has moved exactly in the opposite direction and trades over 20 percent higher through the same stretch.

Toyota’s stock is up over 20 percent year-to-date, while Ford is only up 2 percent.