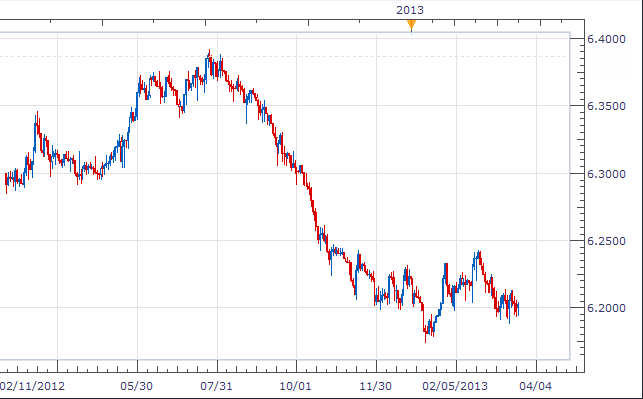 Article Summary: China is the world’s second-largest economy and its economic growth far outpaces major industrialized counterparts. Yet its domestic currency, the Chinese Yuan, is not a truly international currency. Here is a guide on using the USDCNH to trade the uptrend in the Chinese Yuan.

China is the second largest economy in the world, while its currency Renmnibi is not yet a truly international currency. Yet with the fast developments in China’s financial system, more Chinese currency products such as offshore futures have been and will be launched overseas. Investors are likely to be able to trade in a new global currency competing with the dollar and the euro in the near future.

Before investing in this new opportunity, traders will want to understand some key concepts first.

China ‘s currency is officially called the Renminbi, People’s Currency literately. The Yuan is the unit of account, similar to the dollar, so China’s currency also can be called as the Chinese Yuan.

Renminbi, denoted RMB is the name for the currency traded both onshore and offshore.

If the RMB is traded onshore (in mainland China), it is referred to as CNY—traded as USD/CNY.

If the RMB is traded offshore (mainly in Hong Kong), the ticker will be USD/CNH. Thus, RMB is one currency but trades at two different exchange rates depending on locations.

Many investors may ignore this potential opportunity as they believe RMB is fixed to the US Dollar. It is partly true. Unlike the U.S. dollar or the Euro, the RMB is not fully-pledged simply based on market supply and demand; instead, the trading price of RMB is managed floating within a range of 0.5 percent around the central parity published by the People’s Bank of China. The central parity is determined by a basket of foreign currency including the US dollar, Euro, Japanese Yen and other currencies.

The good news for traders is that despite of controlled volatility, the intrinsic value of RMB is indeed affected by economic forces in the market. Both hedgers and speculators may take advantage of RMB trading.

In the domestic RMB market, the main players are onshore exporters, who demand CNY and sell the US dollar, and importers pay US dollar with CNY. On the other side, most speculators participate in the offshore currency market via the USDCNH in Hong Kong’s markets. As the demand for CNH usually exceeds supply, which is suppressed by government regulation, the CNH is generally trading above the value of CNY.

The Central Bank of China plays the most important role on formulate policy on the RMB exchange rate and also on the reforms to increase the role of Chinese Yuan on the world stage. Investors will want to keep an eye on it to gauge any clues on fundamental changes and the timing for the Chinese Yuan to become a truly global currency.

In order to keep currency volatility within the expected range, PBOC, the largest currency trader in China with over $3 trillion foreign reserves, purchases or sells the US Dollar in the open market.

Since the height of the global financial crisis in 2008, China has intensified efforts to promote the RMB as an international currency. Yet more important questions to potential investors are when and how the process will take place. In order to predict future, we first need to review history first in order to determine the critical timing for changes in the Chinese Yuan.

The Renminbi was first issued on December 1, 1948 and soon pegged to the US dollar with USDCNY at approximately2.46Yuan. At that time, China had little international trade so the setup of exchange system remained in in relative infancy.

As imports and exports continued to increase sharply, China adopted a double currency system starting in 1981: regardless of the official exchange rate, a US Dollar at 2.80 Yuan was used for trade settlement.

From 1994, the Chinese government pegged the RMB to the greenback within a narrow range from 8.27 Yuan to 8.28 Yuan. The fixed exchange rate guaranteed a relatively stable financial market and helped protect against external shocks as China’s economy expanded at a fast pace.

On July 21, 2005, the People’s Bank of China announced that it would lift the peg to the US dollar and increased flexibility of RMB exchange rate. Following the release, RMB appreciated by 2 percent to 8.11 Yuan. As the use of China’s currency expanded from trade settlement to offshore financial markets and direct investment, RMB reform and internationalization has accelerated with a market-oriented focus.

Overall, the development of China’s economy is the main driver to RMB globalization.

Previous: Trading Around the US Dollar