The risk-sensitive Australian Dollar may close out the week on a low note after dropping sharply versus the US Dollar overnight. The move was driven by a surge in Treasury yields, more so along the short-end of the curve, boosting the Greenback’s appeal to investors. The 5-year US yield briefly rose above 3% for the first time since November 2018. The Aussie Dollar may move lower into the weekend if traders continue to ditch US government bonds.

Gold prices were another victim of Treasury rates, with the move in nominal yields lagging against its inflation-indexed counterparts. That pushed breakeven rates higher but it wasn’t enough to take the focus away from the move in real yields. Silver prices fell more than 2%, while gold prices moved nearly 0.5% lower. The Treasury auction for 5-year TIPS saw strong demand despite the Fed continuing to ratchet up its hawkish rhetoric.

Australia’s manufacturing sector activity rose in April to 57.9 from 57.7, according to a purchasing managers’ index (PMI) report from S&P Global. The services sector rose to 56.6 from 55.6 for the same period. A quarterly production report from OZ Minerals will cross the wires later today, which will shed some light on the state of Australia’s mining industry. Iron ore prices are slightly lower this week, although they remain near 2022 highs at 153 per metric ton. The lockdown in Tangshan, China, is likely contributing to some of that weakness this week.

The Chinese Yuan dropped again versus the US Dollar, extending its sharp slide that began earlier this week. The costs of hedging against further Yuan declines surged to its highest level in over a year as implied volatility surged. The Japanese Yen resumed its fall against the USD as well, with USD/JPY rising nearly 0.5% into APAC trading. Japan’s March CPI print will cross the wires at 23:30 GMT. Analysts expect to see a core y/y figure of 0.8%, according to a Bloomberg survey. A higher-than-expected print would complicate the Bank of Japan’s efforts to support ultra-loose monetary policy. Japan will see Jibun Bank PMI figures drop later today.

AUD/USD is trading just above its 50-day Simple Moving Average (SMA), which is currently aligning with the 61.8% Fibonacci retracement level. That may provide a degree of confluent support, but a drop lower would threaten the high-profile 200-day SMA. The MACD oscillator is nearing a bearish cross below its center line, which may bolster the case for further losses. A rebound would see bulls set their sights on the 38.2% Fib level. 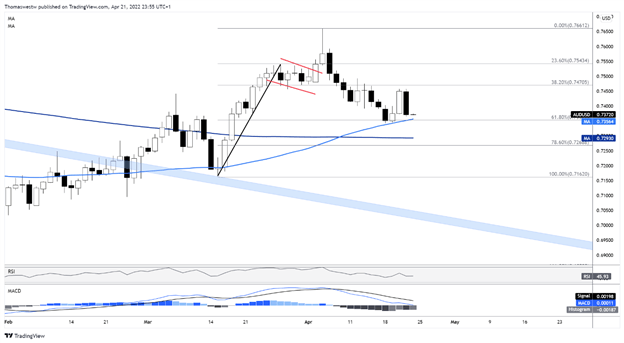