Asia-Pacific markets may fall today after a tumultuous day on Wall Street when stock indexes moved lower for a second day. Bitcoin responded to the risk aversion by dropping more than 3%, bringing prices to the lowest level traded at since March 24. The US Dollar strengthened against most of its major peers, with the DXY index inching closer to the psychological 100 level. Oil prices fell on a larger-than-expected US inventory build.

The risk-off flows were spurred by the release of the Federal Reserve’s latest meeting minutes and the US pushing more sanctions on Russia for alleged war crimes in Ukraine. The FOMC minutes showed Fed members are perhaps a bit more hawkish in their respective outlooks than traders expected. That, in addition to Leal Brainard’s comments, has bolstered rate hike bets. The chance for a 50-basis point hike at the May meeting has increased this week, according to overnight index swaps (OIS).

President Putin’s two adult daughters were formally targeted by the United States in response to suspected war crimes in the Ukrainian towns of Bucha and Mariupol. The US is also sanctioning Russia’s foreign minister, including his wife and daughter and former Prime Minister Dmitry Medvedev. President Biden also announced that new investments in Russia would be prohibited for all Americans. Moreover, sanctions targeting Russian banks were reinforced, although energy purchase carve-outs remain.

Australia is set to release trade data today. The February figure is expected to cross the wires at A$11.65 billion, according to a Bloomberg survey. That would be down from the prior month’s A$12.9 billion surplus. The smaller trade surplus may be driven by growth in imports as the Australian consumer economy continues to strengthen following the country’s full reopening after years of Covid-related restrictions.

BTC/USD crossed below the 61.8% Fibonacci retracement level and the 20-day Simple Moving Average overnight. Prices may fall further, which would bring the 100-day SMA into focus, with the high-profile 40,000 level below that. The Relative Strength Index (RSI) and MACD oscillators are both flashing bearish signs, with RSI crossing below the 50-center mark and MACD crossing below its center line. 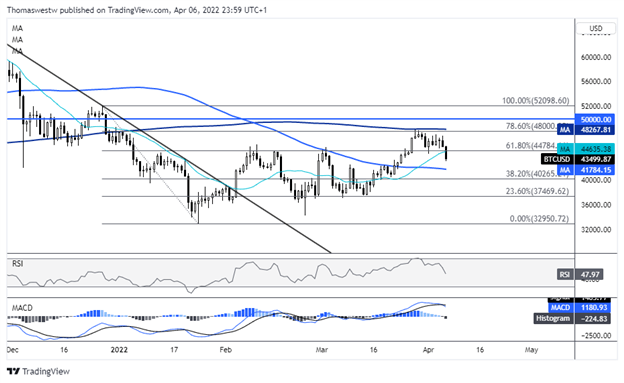