Asia-Pacific markets are in for another rough session today as fears that surging oil prices will derail the global economic recovery push investors into safe-haven assets. WTI oil prices surged over 5% overnight as talks over a possible ban on Russian oil imports picked up steam. US gasoline prices soared to a new record high of $4.1014 on Monday, according to GasBuddy data. Commodity prices elsewhere, including gold prices joined, oil’s bullish move. The abrupt rise in raw material prices is likely to put pressure on the world economy. The tech-heavy Nasdaq-100 Index (NDX) sank 3.75%

The commodity-linked New Zealand Dollar hit a fresh multi-month high overnight but reversed lower early this morning as haven bids for the Greenback pressured the Kiwi Dollar. New Zealand moved on Monday to introduce legislation allowing its own sanctions targeting Russia, with Prime Minister Jacinda Ardern supporting the measure. A vote is expected to be held on Wednesday. This morning, ANZ Bank reported that it sees the RBNZ raising its cash rate to 3.5% by April 2023.

Elsewhere, European gas prices surged after Russia signaled it would consider cutting off the Nord Stream 1 pipeline in response to Western sanctions. No decision has been made yet, said Russia’s Deputy Prime Minister Alexander Novak overnight. Europe is currently taking steps to diversify away from Russian energy sources, but that could take months, leaving the bloc vulnerable to an energy crisis if Russia does cut off the flow of natural gas.

Today will see an update on Australian business confidence for February from the National Australia Bank (NAB). Japan’s January coincident index and its Eco Watchers survey (Feb) will cross the wires. On Monday, China reported a drop in its foreign-exchange reserves in February, falling to $3.214 trillion from $3.222 trillion amid a drop in asset prices and a stronger US Dollar.

NZD/USD pulled back overnight, stopping just short of the falling 200-day Simple Moving Average (SMA) after posting its highest mark since November 24. The 20-day SMA crossed above the 50-day SMA this morning, indicating the bullish price action seen since the January swing low. Bulls may regroup to make another push higher this week if prices hold above the 0.6800 level. 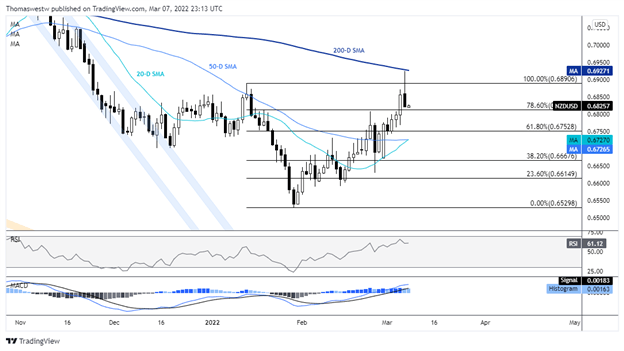