Asia-Pacific markets look set for a mixed open as traders mull the latest developments stemming from the Ukraine conflict. US stock markets trimmed heavy losses overnight, with the tech-heavy Nasdaq 100 index closing 0.34% higher, but the S&P 500 shed 0.24%, securing a second monthly loss for the US benchmark. Investors flocked to the safety of Treasuries, particularly short-term tenures, reversing some recent flattening across the curve that occurred in recent weeks. The Japanese Yen and Swiss Franc attracted heavy inflows amid the volatile market landscape as traders assessed the latest western sanctions on Russia.

Bitcoin, and other major cryptocurrencies, were big winners going into today’s APAC trading session. BTC/USD rose north of 10% over the past 24 hours, bringing prices to the highest levels since February 17. The cascade of sanctions being piled onto Russia from the United States and its allies, including the removal of major Russian banks from the SWIFT messaging system, has effectively marooned the Russian banking system from the global financial markets, casting doubt on Russia’s financial ability to weather the economic penalties. The Russian Ruble tumbled further against the Greenback overnight, with USD/RUB rising more than 20%.

The sharp rise in Bitcoin and other cryptocurrencies comes amid a significant uptick in trading volumes in Russia’s Ruble and Ukraine’s Hryvnia, according to data firm Kaiko cited in a Bloomberg report. Russian oligarchs and others who fear being impacted by the sanctions may be fleeing to Bitcoin, given its perceived insulation from the traditional financial system. Ukraine’s Vice Prime Minister, Mykhailo Fedorov, requested major exchanges to restrict users with a Russian address on Monday.

The response from major crypto exchanges has been mixed. Binance said it would block sanctioned individuals but would not freeze all Russian accounts. The possibility exists that western powers may soon target these flows, although Russia’s ability itself to sidestep sanctions through crypto is likely very limited. Meanwhile, crude oil is trading near the 96 level as traders move to price in a global market without Russia’s nearly 10 million barrels per day. Canada announced a ban on all Russian oil imports, although the country hasn’t imported any since 2019.

Today, China’s National Bureau of Statistics (NBS) will report February purchasing managers’ indexes (PMI) for its services and manufacturing sector. Analysts see manufacturing PMI dropping back into the contractionary territory at 49.8, according to a Bloomberg survey. That would be the weakest manufacturing report since October when Covid’s Delta variant and an energy crunch stifled factory activity. The services sector is expected to fall as well but should remain in expansion above the 50 level.

The Reserve Bank of Australia (RBA) is set to report its March interest rate decision at 3:30 GMT today. The Australian central bank is likely to keep its benchmark rate steady at 0.10% despite robust labor market strength and lofty raw material and consumer product prices. Still, RBA Governor Philip Lowe may strike a more hawkish tone, in a further capitulation to relatively hawkish market expectations. The missing piece for an RBA rate liftoff appears to be weak wage growth, tracking at 2.3% y/y in the fourth quarter, allowing RBA policymakers to stand firm. The market sees over 90 basis points of tightening by the December meeting, according to cash rate futures. AUD/USD may rise if Mr. Lowe indicates a willingness to tighten monetary conditions sooner than previously communicated.

BTC/USD rocketed higher overnight, clearing above the 40,000 psychological level, the 50-day Simple Moving Average (SMA) and the 38.2% Fibonacci retracement. The next obstacle for bulls is the 61.8% Fib level and the falling 100-day SMA. A break above those levels may shift bulls’ focus onto the 50,000 mark, a level untouched since December 2021. Momentum looks healthy, with the MACD line crossing above the signal line and on track to cross above the center line. The Relative Strength Index (RSI) is also moving firmly higher. Alternatively, a pullback may drag prices to the 40,000 level, where some support is likely to be offered. 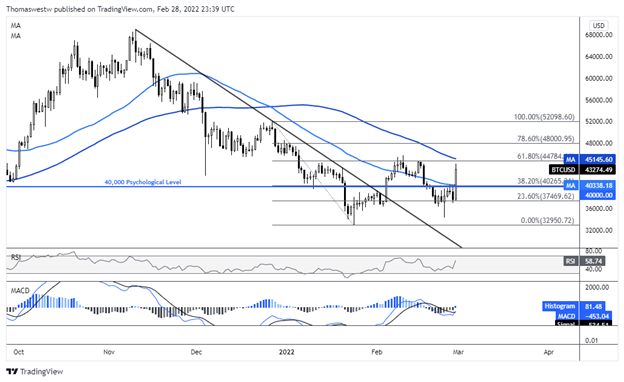