The sentiment-linked Australian Dollar and New Zealand Dollar managed to outperform their major counterparts on Tuesday despite volatility in stock markets. On Wall Street, futures tracking the Dow Jones, S&P 500 and Nasdaq 100 fell 1.21%, 0.72% and 0.54% respectively. This follows ongoing geopolitical tensions around Ukraine.

Overnight, Russia’s President Vladimir Putin recognized two breakaway regions in eastern Ukraine, ordering “peacekeeping forces” into them without details. Western sanctions soon followed, with US President Joe Biden implementing them on Russian sovereign debt as well as threatening to impose more. Mr. Biden also added that this was the beginning of a Russian invasion of Ukraine.

However, these measures seemed to stop short of what could have been more devastating proposals. While equities around the world clearly exhibited a ‘risk-off’ response, foreign exchange markets took on a more different setting. Typical haven-oriented currencies, such as the Japanese Yen and Swiss Franc, clearly underperformed. The latter’s decline is particularly interesting considering its regional haven role.

It should be noted that front-end US Treasury yields rallied, far outpacing gains in longer-dated bonds, such as the 10-year. Fed funds futures also started to reprice odds of 6 rate hikes from the Federal Reserve this year. Perhaps the market took the latest geopolitical tensions as the relatively ‘better’ outcome. This could have driven demand back for carry trade, where JPY and CHF tend to act as funding currencies.

The Australian Dollar climbed against the US Dollar on Tuesday, further pushing AUD/USD above a descending trendline from October. Prices do seem to be trading within a bearish Rising Wedge chart formation. This is as the 100-day Simple Moving Average (SMA) is nearing and may hold as key resistance. Breaking under the wedge could hint at downtrend resumption. Otherwise, moving above the SMA opens the door to facing the January high. 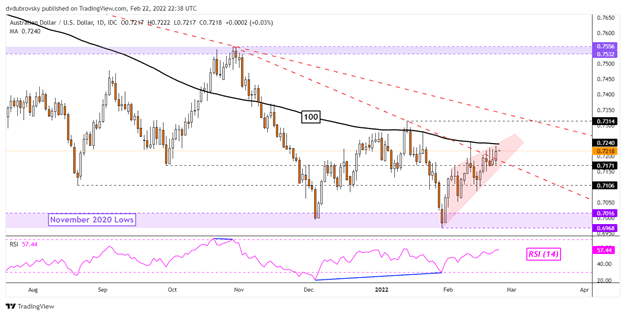 Meanwhile, the New Zealand Dollar will be closely eyeing the RBNZ rate decision today. NZD sits in an interesting place. The market is anticipating a rate hike to 1.00% from 0.75%, with more to come this year. Those expectations are already aggressive, with overnight index swaps looking at 7 hikes by November. As such, the Kiwi Dollar could be left vulnerable to a central bank that struggles to meet such aggressive tightening bets. NZD traders will also be tuning in for further information about the RBNZ’s balance sheet.

Given that both AUD and NZD tend to exhibit pro-risk trading dynamics, looking at AUD/NZD could offer a better glance at how RBNZ policy bets impact Kiwi price action. AUD/NZD recently left behind a Shooting Star candlestick pattern that has since seen some follow-through. This could hint at further losses. Clearing the 20-day SMA exposes the 50-day line, where the latter may reinstate an upside focus. Key resistance seems to be the June 2021 high at 1.0813. 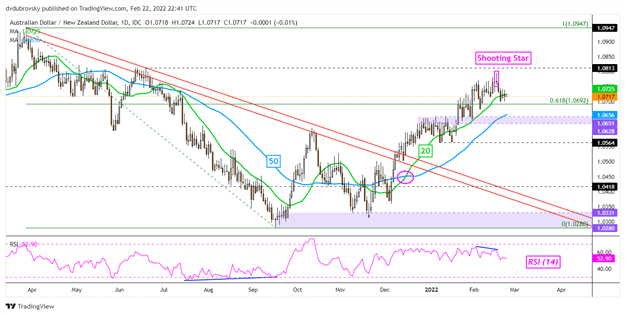