Asia-Pacific markets may come under pressure today after escalating geopolitical tensions sent US stocks lower overnight. The Luhansk People’s Republic (LPR) – a quasi-breakaway state within Ukraine – came under sustained mortar fire yesterday. The Organization for Security and Cooperation in Europe (OSCE) stated that tensions seem to be easing in the region, according to its staff. The New Zealand Dollar appeared relatively immune to the risk aversion, with NZD/USD higher through overnight trading.

A pullback in Federal Reserve rate hike bets for the March policy meeting dragged the Greenback lower overnight despite the broader risk-off move. The chance for a 50-basis point rate hike – per market pricing -- has fallen sharply over the last week, with a 25 bps hike now seen as the most likely outcome. That sparked a bid across the Treasury market, dragging US rates lower and increasing the NZD’s yield premium. 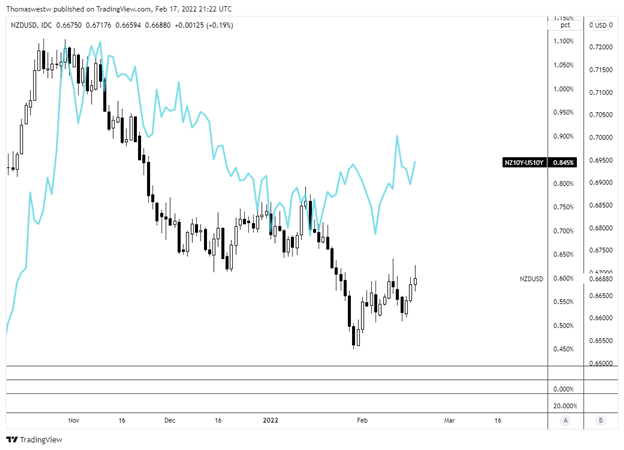 WTI crude and Brent crude oil futures fell overnight as energy traders weighed escalations in Ukraine against talks in Vienna between Iran and the United States. Those negotiations are in the final stages, according to US State Department spokesperson Ned Price. An agreement would see the countries return to the nuclear deal abandoned in 2018, likely removing sanctions on Iran, allowing over 1 million barrels per day to return to the global market.

Japan’s national inflation rate on a y/y basis fell from 0.8% to 0.5%, below the 0.6% Bloomberg consensus forecast. A measure excluding food and energy prices fell to -1.1% from -0.7%. The Yen is slightly stronger against the US Dollar after haven flows pushed USD/JPY to a weekly low. The Nikkei 225 index was one of Asia’s biggest losers on Thursday, likely due to JPY strength, which disadvantages the country’s exports.

NZD/USD is probing the 23.6% Fibonacci retracement level, which has held bulls back on several intraday moves over the past week. A break higher would open the door for a test of the 50-day Simple Moving Average (SMA). Alternatively, if prices shift lower, bears may start to chip away at February’s gains. The RSI and MACD oscillators are moving higher, showing bullish energy remains intact. 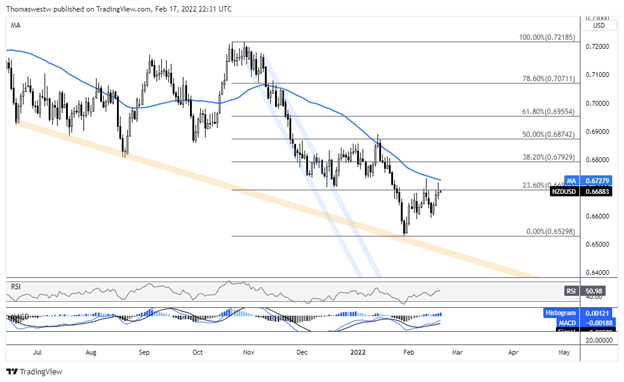