Asia-Pacific markets look set to open cautiously higher, with the risk-sensitive Australian Dollar gaining versus the US Dollar. APAC traders are watching for a purchasing managers’ index (PMI) report out of China, set to cross the wires at 0030 GMT. The services sector PMI report from Caixin, which focuses on smaller to medium-sized firms (unlike the SOE-heavy official NBS PMI), is expected to fall to 50.5 from December’s 53.1 reading, according to a Bloomberg survey.

The reduced activity in China’s services sector is likely a result of the Omicron variant causing sporadic regional lockdowns. A drop into contraction territory may be on the table, given the relatively weak estimates from analysts. That could inject some risk aversion into financial markets amid worries about Covid-related drag on Asia’s economic engine. The Caixin data follows a drop seen in the NBS’s data for January that crossed the wires last week at 51.1, down from 52.7 in December.

The remainder of today’s session is rather light in terms of economic data, which is a theme that will continue through the week. Later today will see bank lending and household spending data out of Japan, and Indonesia will report full-year gross domestic product (GDP) growth for 2021. A final read on December’s Australian retail sales will also cross the wires. Traders will also be watching rising global bonds yields, especially in Europe, where a hawkish turn in ECB policy bets has induced a heavy round of selling.

Later this week, Australian consumer confidence data may inject some volatility into the Australian Dollar. The index from Westpac has been declining since November. Outside of APAC, the United States CPI index is expected to rise to 7.3% year-on-year in January. That would be up from the prior month and mark the highest benchmark inflation reading since early 1982. An even hotter print than expected could push rate hike bets toward pricing in a higher probability of a 50 basis point hike at the March FOMC meeting, which would likely induce Greenback buying and send Treasury yields higher.

AUD/USD is slightly higher in early APAC trading as Aussie Dollar bulls look to resume last week’s pre-NFP recovery. That rise followed the appearance of positive divergence between prices and the RSI oscillator. However, the exchange rate continue to face resistance at the 20- and 50-day Simple Moving Averages, which capped upside progress late last week. 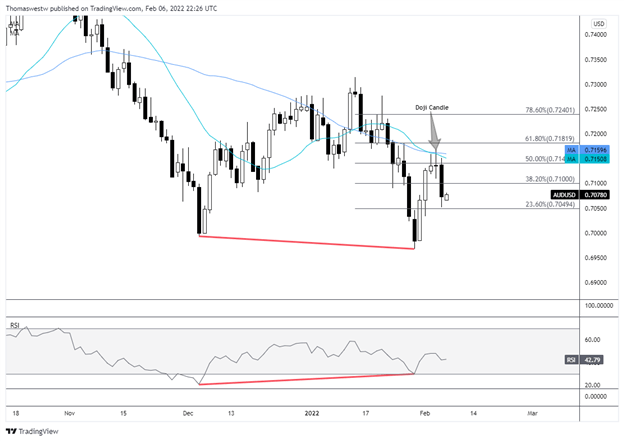