Asia-Pacific markets look set to rebound after a volatile week of trading when the Federal Reserve’s move toward a more hawkish policy outlook rattled markets. The risk-sensitive Australian Dollar fell sharply against the FOMC-charged US Dollar, as traders priced in a stronger chance for a 50 basis point liftoff in March. US stocks recovered a portion of losses on Friday, and futures are indicating that APAC equity markets will open higher. AUD/USD is moving just a tad higher in early APAC trading.

That may be due to a rosy purchasing managers’ index report out of China. The National Bureau of Statistics (NBS) reported a January PMI read of 50.1, beating the 50.0 Bloomberg consensus forecast - although the rate of expansion slowed from December. The Omicron variant was the likely headwind for the Chinese manufacturing sector this month, as sporadic lockdowns across coastal cities – where much manufacturing is based – closed factories intermittently.

The Omicron variant had a similar impact on Japan’s industrial sector in December, according to government data released this morning showing a -1.0% m/m figure for industrial production. That was below what analysts expected at -0.8%, according to Bloomberg data. Retail sales were also disappointing, coming across at 1.4% versus 2.7% expected (y/y). Later today, December’s Australian private sector credit report will cross the wires, along with Japanese consumer confidence figures for January.

Later in the European session, the Euro Area will see the fourth-quarter update of its gross domestic product (GDP) economic growth gauge. Euro Area inflation data and a policy decision from the European Central Bank (ECB) later this week may also make for potentially volatile trading in the Euro. Traders have punished EUR/USD in recent weeks as they price in a more aggressive Federal Reserve.

Speaking of central bank policy, the Reserve Bank of Australia (RBA) will serve as the APAC region’s most watched event this week, with high-impact potential on the Australian Dollar. AUD/USD fell to its lowest level since July 2020 earlier this month, and bulls may stage a comeback if the RBA capitulations to market expectations, which have been pricing in a much more aggressive rate hike outlook compared to Mr. Lowe’s central bank. The RBA is expected to announce an end to its bond buying program on Tuesday. Keep in mind that month-end flows may contribute to volatility in equity markets today.

AUD/USD’s fresh low made last week revealed a positive divergence between the Relative Strength Index (RSI) and prices. That, especially with RSI coming out of oversold territory, is a bullish sign that indicates downward pressure on prices may be easing. That said, a break back above the November 2020 low at 0.6991 may see more upside follow, with the August 2021 swing low at 0.7106 serving as a likely target for bulls. 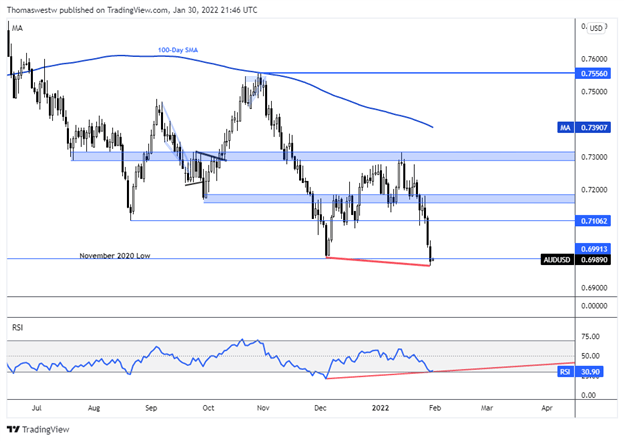