Australian Dollar Forecast: AUD/USD May Be Primed for Gains on Rosy Jobs Report

The Australian Dollar fell against the US Dollar after Australia reported a gain of 64.8k jobs for December, down from +366k in November. Analysts expected a +60k print, according to a Bloomberg survey. The participation rate stayed constant at 66.1%, missing expectations of 66.2%. The unemployment rate, dropped from 4.6% to 4.2%, well below the consensus 4.5% expectation. The Australian Dollar strengthened slightly against most major peers following the report.

Overall, it’s a rosy report despite being weaker than the prior month and shows the Australian economic recovery remains strong. Still, the path forward remains rocky amid surging Omicron cases worldwide. Australian consumer confidence dropped this month, according to Westpac. That was largely attributable to the Omicron variant. AUD/USD gained overnight as Treasury yields pulled back across most tenors. The US Dollar was broadly weaker. The market pricing for an RBA rate hike this year continues to strengthen despite RBA Chief Lowe pushing back against a potential liftoff. 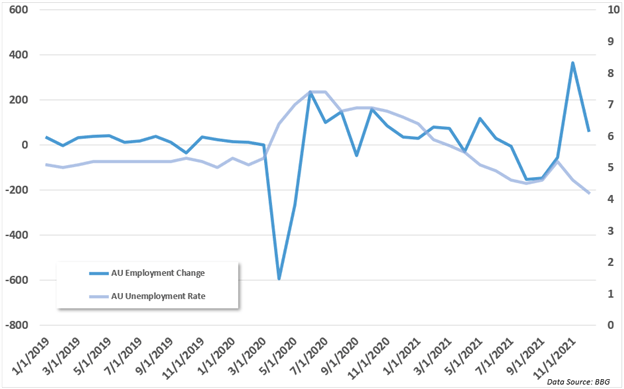 Stocks finished mostly lower overnight on Wall Street as traders weigh the risk of rising yields and the potential for the reflation trade to fizzle out if the Fed can’t get a grip on inflation. The benchmark S&P 500 index fell 0.97%. Oil prices rose after an explosion in the Middle East took an Iraqi oil pipeline running through Turkey out of operation. The pipeline, which supplies around 450k barrels per day, is back in operation, according to Turkish officials.

Elsewhere, gold prices gained and broke above a key level of resistance overnight. The yellow metal is benefiting from market volatility and geopolitical instabilities. Russia continues to usher more troops and military equipment to the Ukrainian border in what clearly appears to be preparations for a ground invasion. The US Secretary of State, Anthony Blinken, is slated to meet with his Russian counterpart later this week to attempt to find a diplomatic situation, but intelligence officials are warning that Russia may invade at any moment. Such an event would likely spark a bout of increased market volatility.

China is expected to cut its one-year loan prime rate (LPR), the rate most lending in the country is derived from, today. The five-year LPR, which most mortgages are based on, is expected to remain unchanged. Earlier this week, the People’s Bank of China (PBOC) cut the one-year medium-term lending facility for the first time since early 2020. Chinese policymakers are attempting to boost economic growth in the country amid continued fallout from last year’s property sector crisis. President Biden stated early this morning that his administration is not ready yet to lift some tariffs on China.

AUD/USD rose overnight and looks primed for further strength in Thursday’s APAC session. A major level of resistance around the 0.73 level looms, with the falling 100-day Simple Moving Average (SMA) directly below that. Alternatively a move lower could see support offered by the way of the 38.2% Fibonacci retracement. 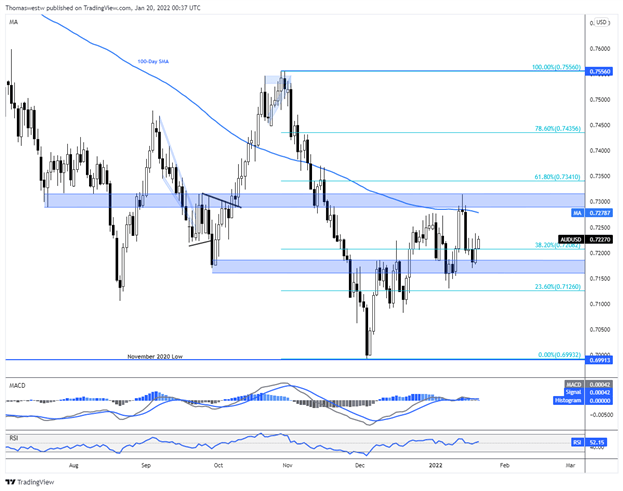