The Japanese Yen and British Pound were some of the worst-performing G10 currencies on Monday, with the Canadian and Australian Dollar pushing slightly higher against their major peers. Top-tier event risk was China’s fourth-quarter GDP print, which clocked in better than expected across the board. Still, the world’s second-largest economy continue to slow amid local, growth-hampering woes.

US markets were offline for the Martin Luther King Jr. Day holiday, creating relatively illiquid trading conditions. There was also a lack of fresh economic data, placing the focus for markets on broader fundamental themes. This includes global monetary policy tightening, especially from the United States. Last week, US CPI data registered at a 40-year high. 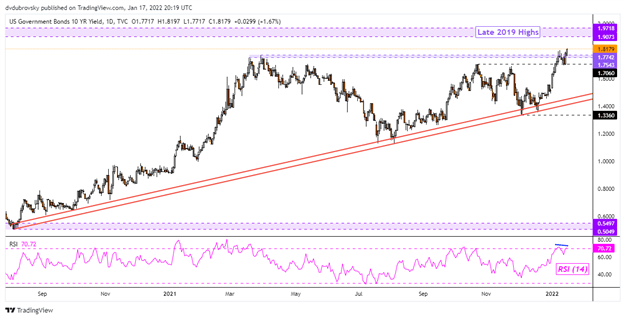 Asia-Pacific markets appear to be heading for a rather quiet Tuesday. Top-tier event risk will likely be the Bank of Japan interest rate decision. While there is no specific time for the announcement, excluding outliers, it tended to cross the wires around 3:00 GMT since 2020 – see below. The BoJ is widely expected to maintain both the benchmark lending rate and 10-year yield target unchanged at -0.10% and 0.00% respectively.

Yen traders will likely pay more attention to the central bank’s updated growth and inflation projections. Despite these changes, the central bank is widely anticipated to remain dovish relative to its major counterparts. Thus, the focus for the anti-risk JPY will likely remain glued to how other central banks tighten policy and overall market risk appetite. This may leave USD/JPY skewed higher down the road. 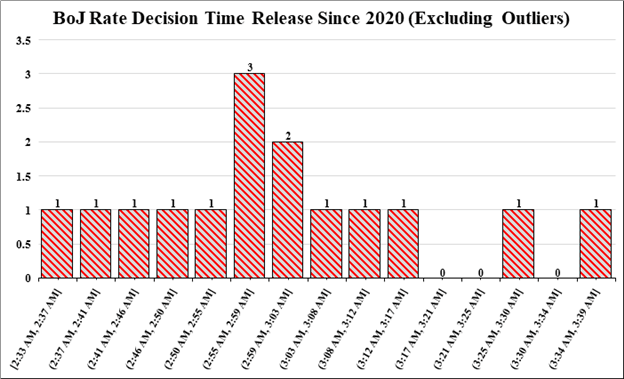 USD/JPY aimed higher over the past 24 hours as the major pair tested the 50-day Simple Moving Average (SMA). Prices left behind a bullish Morning Star candlestick pattern, which could be a sign of a turning point. Still, further confirmation is needed to shift the near term technical outlook bullish following losses since the beginning of the year. Immediate support seems to be the 23.6% Fibonacci extension at 114.138. 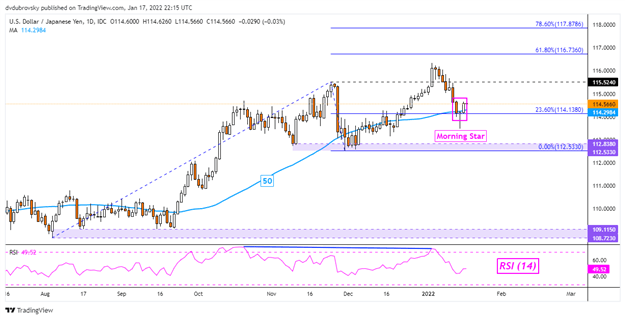