The risk-sensitive Australian Dollar moved higher overnight after stocks surged on Wall Street after Federal Reserve Chair Jerome Powell testified before the Senate Banking Committee. Mr. Powell attempted to relax lawmakers over their concerns on high and persistent inflation seen in the economy, saying he expects inflation to peak later this year, but that the Fed stands ready to take further action if necessary. Markets expect three to four rate hikes this year, with the first predicted as soon as March.

Today, Chinese inflation data will cross the wires for December, with analysts expecting the annual consumer price index (CPI) rate to drop from 2.3% to 1.8%. China’s factory-gate prices will accompany the inflation data, which will shed further light on the overall price pressures in the economy. Falling vegetable and pork prices are seen as responsible for the drop in prices. The Yuan strengthened overnight against a broadly weaker US Dollar.

The US Dollar moved lower after Mr. Powell’s testimony, with the DXY index dropping to its lowest point since November 30. That helped oil prices rally along with other commodities, including gold, silver and copper. The New Zealand Dollar also performed well overnight, advantaged by the Powell-induced USD weakness. Treasury yields on the longer end of the curve ticked higher leading into today’s APAC session.

Outside of Chinese inflation data, market participants have a speech by Bank of Japan Governor Haruhiko Kuroda. Japan’s Eco Watchers survey for December will also cross the wires. Later today, China will report new Yuan loans (Dec), which analysts expect to drop at CNY1250 billion. That would be down slightly from November’s CNY1270 billion figure. While that figure is down to end the year, 2021 likely represented a record-breaking year for bank loans in China.

AUD/USD rose overnight clearing a key level of resistance seen through early December. The 38.2% Fibonacci retracement and the falling 50-day Simple Moving Average (SMA) is currently testing bulls’ resolve. A move higher will open up a test of the December swing high at 0.7277. Alternatively, a break lower may see possible support from the recently breached resistance level, with the 23.6% Fib level below that. 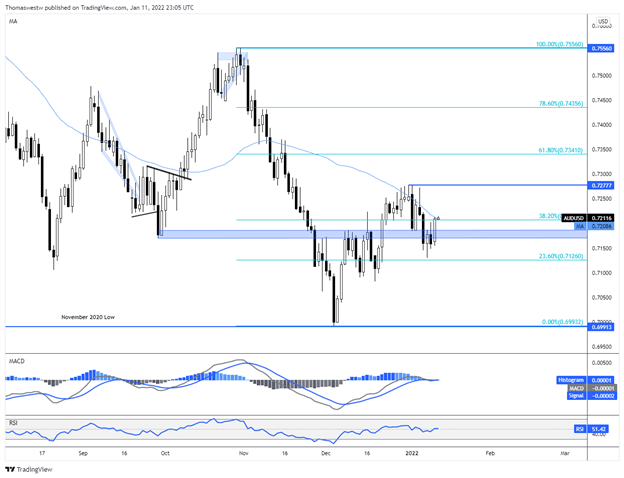