Asia-Pacific traders will attempt to put a finger on the market’s pulse this morning following some volatile and downbeat price action last week. The AUD/USD is a common pair to gauge market sentiment, and it is moving slightly lower in early APAC trading. An apparent acceleration to the Federal Reserve’s rate hike outlook spooked market participants last week, with US and Asian equity indexes moving lower; although, Honk Kong’s Hang Seng Index (HSI) managed to record a modest gain.

The week ahead is packed with plenty of possible event risks, both in the Asia-Pacific region and in the United States. China is set to release December inflation data later this week, with analysts predicting the year-over-year rate to drop to 1.8% from 2.3%, according to a Bloomberg survey. The Chinese Yuan fell versus the Greenback last week. Currencies traders expect the Yuan to weaken further in the coming months as China moves to support growth through exports, its primary economic growth driver.

In the United States, Federal Reserve Chair Jerome Powell will testify before a Senate Committee when lawmakers are likely to press him on the sustained inflation, which has been a growing issue that threatens economic growth. This comes amid a growing consensus among economists that the US central bank has fallen behind the curve on inflation.

That was reinforced over the weekend by a bipartisan group of economists during the annual meeting of the American Economic Association. The US consumer price index (CPI) is set to see inflation rise in December at the y/y pace of 7%, according to the DailyFX Economic Calendar. A hotter-than-expected print would likely firm up the already hardening hawkish Fed stance. That could strengthen the US Dollar and weigh on gold and other metals like gold, which saw a big drop last week.

However, today’s economic docket Is rather bland in comparison to what is to follow. Australia will report preliminary building permits data for November, which is expected to drop at 0.0%, up from -12.9% in October. The TD-MI inflation gauge for December is also set to cross the wires. Later on, the Philippines will report its October retail price index and December foreign exchange reserves. Japanese markets will be closed today for a national holiday.

AUD/USD is facing an area of confliction stemming from the September 2021 swing low. The former area of support turned resistance through much of December appears to be capping upside. If prices do manage to move higher, the 38.2% Fibonacci retracement and the falling 50-day Simple Moving Average (SMA) may provide possible levels of resistance. Alternatively, a downside move could see some support from the 23.6% Fib level and the psychologically important 0.7100 level. 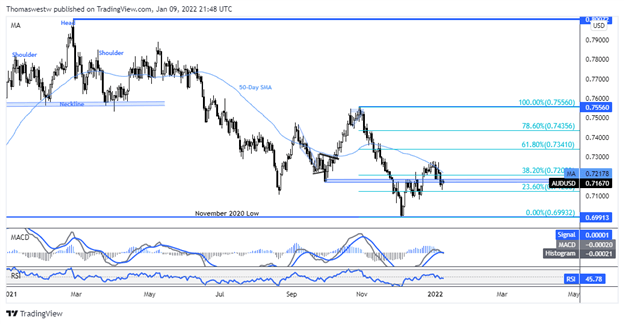