The Australian Dollar fell after the latest jobs data for October crossed the wires Thursday morning. Australia lost 46.3k jobs last month, well below the consensus analysts forecast of +50k, according Bloomberg data. The unemployment rate ticked up to 5.2% from 4.6%. The move higher in the jobless rate, along with the headline figures, is extremely discouraging for the Australian economy at a time when analysts were growing more confident following widespread rollbacks in Covid restrictions.

The Reserve Bank of Australia (RBA) has fallen behind the curve in tightening policy relative to other major central banks. Across the Tasman in New Zealand, the RBNZ has already begun lifting rates. However, the labor market weakness is likely to only embolden the RBA’s relatively dovish stance. The participation rate for October ticked up slightly, showing more people started to look for work, but the supply side is obviously lacking to provide those jobs.

Asian equity markets will likely face some pressure today after a poor showing on Wall Street overnight. The benchmark S&P 500 index sank 0.82%, while the tech-heavy Nasdaq 100 index lost 1.44%. A hotter-than-expected US inflation print sent Treasury yields sharply higher. The consumer price index for October revealed prices are rising at the fastest yearly pace in more than twenty years at 6.2% y/y. That was well north of where analysts had the figure pegged.

Elsewhere, oil prices fell overnight following a build in US inventories, as reported by the Energy Information Administration (EIA). Crude oil stocks rose one million barrels for the week ending November 5. That was below the increase analysts expected, however, inventories at Cushing, Oklahoma appear to have stabilized. The stronger dollar also likely pressured oil prices.

The rest of today’s economic docket is rather sparse, leaving the downbeat sentiment to dominate today’s session. Still, the sharp overnight move may have been enough to satisfy market bears for now, which leaves the door open to a small relief rally. One positive for bulls to grasp onto is China’s Evergrande Group avoiding another default risk after the embattled property developer delivered on three offshore USD bonds.

AUD/USD sliced below the 50-day Simple Moving Average (SMA) overnight, a level that served as support several times over the last week. The 61.8% Fibonacci level at 0.7315 may offer support. That level coincides with resistance seen through September. MACD crossed below its center line overnight, a bearish sign. 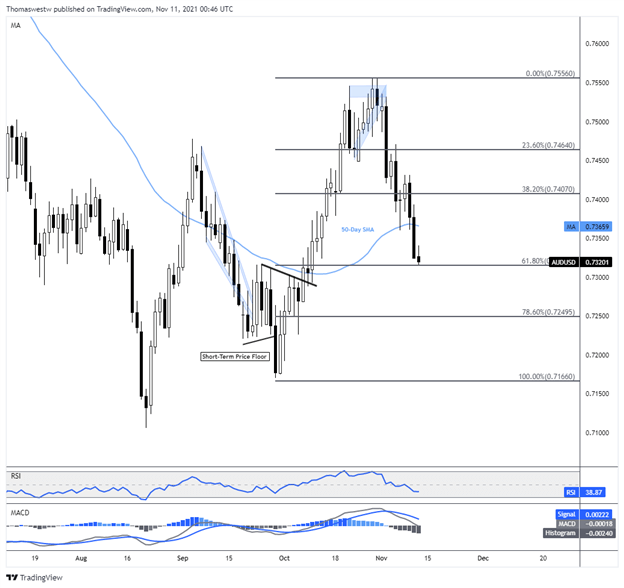