Asia-Pacific markets are facing another mixed day of action after Wall Street saw the third day of losses. The benchmark S&P 500 index fell 0.24% at the closing bell. Investors are starting to see inflationary risks as a more immediate threat to economic growth. The International Monetary Fund (IMF) cut its 2021 global growth forecast in its latest World Economic Outlook report.

The IMF also boosted its inflation outlook, citing global supply chain disruptions brought on by the Covid-19 pandemic. China and the United States both saw a 0.1% reduction from the previous outlook. The pandemic has fueled higher prices across almost every sector from food to computer chips. Apple reported overnight that it will cut its iPhone production targets due to the global chip crunch. That announcement is likely to weigh on technology stocks in the coming days.

Meanwhile, China continues to face an energy crunch – along with Europe and the United States to a lesser extent. Extensive flooding across China’s coal-producing regions exacerbated its energy woes this past week. China responded by increasing the rates that power companies can charge. While that may help alleviate some pressure, the strategy runs counter to Beijing’s broader goal to reduce emissions.

Uranium prices rose by the most on record overnight. The radioactive material is the primary fuel source for nuclear reactors. The positive price action was likely the result of a letter sent to the European Commission on behalf of ten EU countries asking that nuclear power be recognized as a source of green energy. Uranium was already on its way higher this year after some speculative buying activity spurred investors’ interest.

Today’s economic docket sees South Korea’s unemployment rate crossing the wires, followed by machinery orders for August out of Japan. New Zealand’s ANZ Bank will report preliminary business confidence data for October later today, and the day will finish with China’s September trade balance. Analysts expect a slowdown in cross-border trade, with the consensus estimate at $46.8 billion. That would be down from $58.34 billion in August.

Traders will shift their focus to the Australian jobs report due out later this week. Analysts expect a loss of 110k jobs for September, according to a Bloomberg survey. That compares to -146.3k in August. While still a gloomy figure, the outlook is brightening after New South Wales started to roll back Covid restrictions earlier this week. {{GUIDE|AUD}}

AUD/USD appears to be losing some upside momentum heading into the APAC session open. The Relative Strength Index (RSI) is pivoting lower, while MACD looks to be moderating. A return to the recently breached 50-day Simple Moving Average (SMA) may be on the cards. The upside level for bulls may be the psychologically imposing 0.74 level. 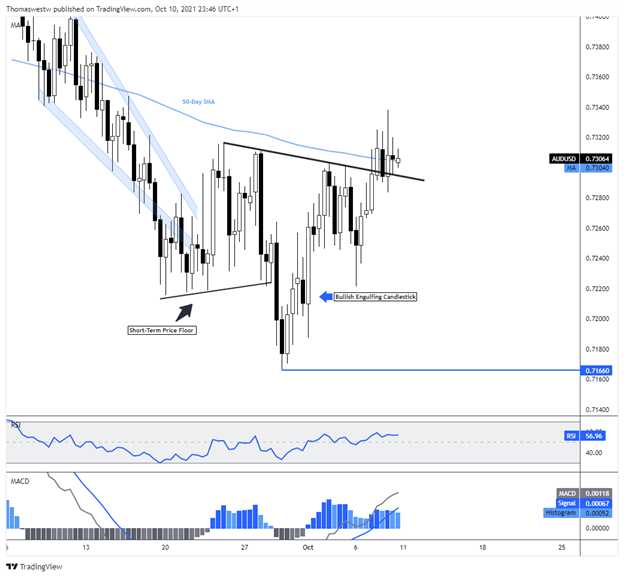