A down day on Wall Street may see Asia-Pacific markets open to the downside. The technology-heavy Nasdaq 100 index lost 2.16% Monday, with Facebook leading markets lower as the social media grapples with a platform-wide outage. That follows poor performances across Asia and European equity markets on Monday. Treasury yields ticked higher, although the 10-year note’s yield failed to maintain above the 1.5% mark.

Crude oil prices hit the highest level in seven years, with WTI climbing over 3%. Energy traders hit the buy button after the Organization of the Petroleum Exporting Countries (OPEC) and its allies declined to increase production despite rising consumer demand. Some analysts expected an increase to 400k barrels per day in November, but OPEC opted to continue with a production increase of 400k barrels. The news lifted Brent oil and gasoline prices higher as well.

An interest rate decision from the Reserve Bank of Australia (RBA) is set to cross the wires today at 03:30 GMT. Analysts expect no change in the RBA’s benchmark rate, and the dovish outlook is likely to remain the set course for the central bank. Australia’s economic progress took a hit earlier this year as the Delta variant put Victoria and New South Wales (NSW) under lockdowns. The Australian Dollar is gaining versus the US Dollar into the morning APAC session.

The Reserve Bank of New Zealand (RBNZ) will publish its own interest rate decision later this week. The island nation is set to increase its benchmark rate by 25 basis points, marking the first hike from a major Asia-Pacific central bank. Elsewhere, Bank of Japan Governor Haruhiko Kuroda will speak and Australia’s August trade data will cross the wires.

AUD/USD rose overnight, breaking above its 26-day Exponential Moving Average (EMA), which may step in to provide support this week. Bulls drove prices higher from last week when prices hit the lowest level since mid-August. The MACD line crossed above its center point, indicating healthy momentum. Bulls may attempt to overtake the 50-day Simple Moving Average (SMA) this week. 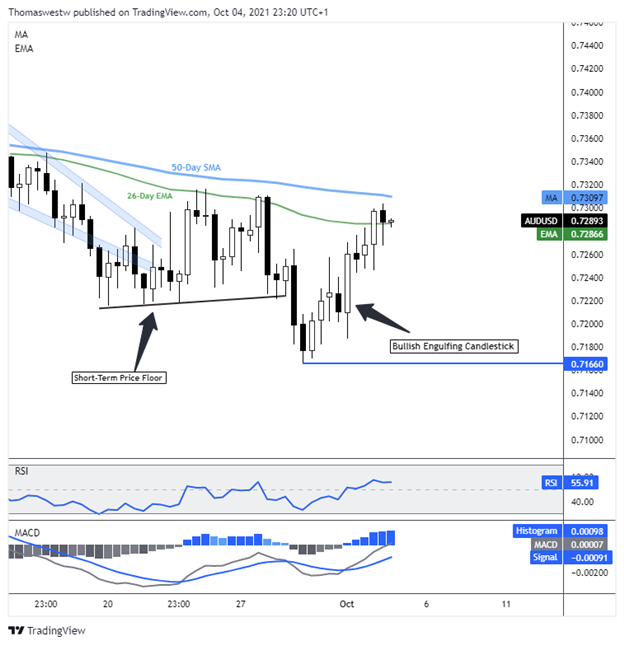