Asia Pacific markets look set to see a bout of risk-on trading to finish the week following a second day of solid gains on Wall Street. The benchmark S&P 500 index closed 1.21% higher in the overnight New York session. Meanwhile, the S&P 500 VIX volatility gauge fell below its 20-day Simple Moving Average, highlighting that the defensive posture amongst traders has receded.

Investors are brushing aside the Evergrande event after the Chinese real estate company made a coupon payment on a series of onshore bonds. Offshore payments seem to still have not been met. A report from the Dow Jones noted that dollar bond holders had yet to receive interest due on Thursday. A potential Evergrande collapse remains on the table, and the Chinese government is being rather quiet to the public front over the situation. According to the Wall Street Journal, Beijing told local governments to prepare for the company to go underwater. The indebted company has another offshore interest payment due next week on September 29, which will likely attract attention from market participants, and perhaps set off another risk event.

In line with the risk-on mood across financial markets and against rising government bond yields, the Australian Dollar made substantial gains against most of its peers. AUD/USD and AUD/JPY gained overnight and appear to be holding momentum into the morning APAC hours. The risk-sensitive Aussie Dollar managed to put in modest gains versus the British Pound, despite the Bank of England coming out with a rather hawkish policy decision.

Circling back to rising bond yields, the 30-year Treasury note led the yield curve increase after putting in its biggest gain of the year. This week’s FOMC decision, and updated dot plot, was largely seen as a hawkish move among market participants, but optimism over a strong economic recovery is buoying sentiment. Fed Chair Jerome Powell and Vice Chair Richard Clarida are slated to speak tomorrow.

AUD/USD rose to its falling 26-day Exponential Moving Average (EMA) before scaling back modestly overnight. Prices haven’t traded above the moving average since earlier this month. A move above that will bring the 38.2% Fibonacci retracement into focus. Alternatively, a move lower will eye the 61.8% Fib level and a descending trendline from July. The MACD line crossed above its signal line, indicating healthy upside energy. 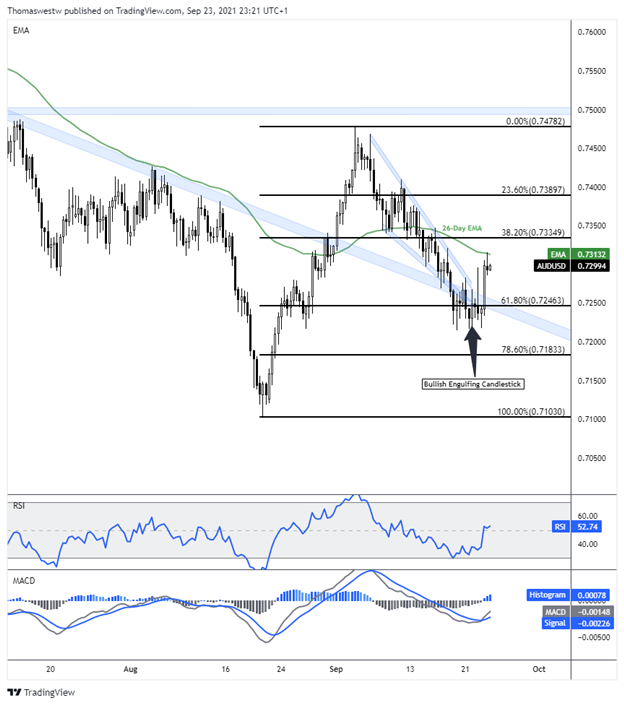