The Australian Dollar is reacting to a fresh round of economic data to start Monday’s session after an abysmal performance last week. Markit Economics released PMI data this morning, which shows the Australian economy continuing to struggle amid ongoing lockdowns across the country. Services PMI remained in contractionary territory at 43.3. Manufacturing PMI dropped to 51.7, indicating a slower rate of expansion.

Australia’s downbeat PMI figures will likely keep the currency pinned down. AUD was the worst-performing G10 currency last week, dropping just over 3% versus the US Dollar. The New Zealand Dollar was a close second, followed by the Canadian Dollar. A crippling wave of infections centered around Sydney in New South Wales (NSW) explained the Aussie Dollar's misfortunes.

Late last week, NSW Premier Gladys Berejiklian announced an extension of Greater Sydney’s lockdown to the end of September. The state leader also outlined more restrictive measures, including wearing masks outside and a curfew. The move threatens to put an already slowing economy on the brink of recession, which would mark the second since the pandemic hit in early 2020. This leaves little for Australian Dollar bulls to rally behind. Later this week, Australia will see retail sales for July cross the wires.

Rate hike bets for the Reserve Bank of Australia (RBA) have plummeted in response to these worsening developments. That contrasts to what traders see for the United States, with Federal Funds Futures are pricing in a 19.8% chance for a 25 basis point Fed rate hike at the June 2022 FOMC meeting, according to the CME Group’s FedWatch Tool. That is up from 17.9% on August 13.

Nonetheless, Delta variant concerns are seeping into Fed think. Dallas Federal Reserve President Robert Kaplan – the first Fed member to call for tapering to start -- expressed concern over the rise in Covid cases within the United States. Mr. Kaplan said if signals start flashing that the virus is slowing economic growth, it may change his view that they should begin tapering soon.

AUD/USD is clinging to a level of congestion seen from late 2020 trading after a big drop last week. Prices have dropped sharply from a Rising Wedge pattern earlier this month, and broke below the 200-week Simple Moving Average in the process. The move lower may be overdone, however, with RSI in oversold territory and MACD at its lowest level April 2020. 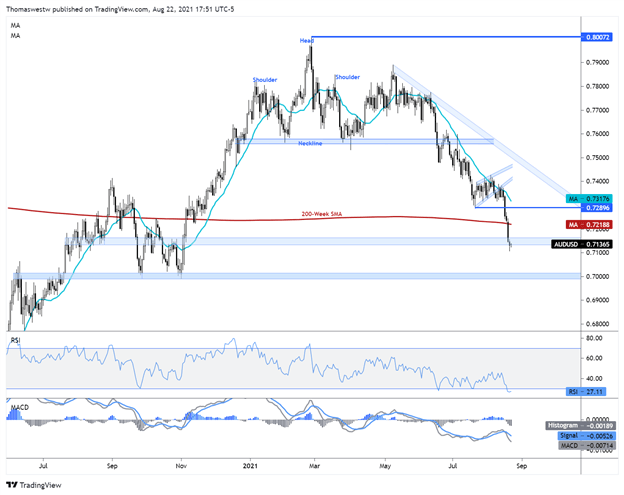