Asia-pacific markets look set for a gloomy session on Thursday following overnight action on Wall Street and in FX markets.The New Zealand Dollar is trading near lows not seen since November 2020 against the US Dollar following Wednesday’s rate decision from the Reserve Bank of New Zealand (RBNZ).

The RBNZ held its overnight cash rate (OCR) steady at 0.25% on Wednesday, despite markets largely pricing in a 25 basis point rate hike. A nationwide 3-day snap lockdown announced shortly before the rate decision derailed the move to tighten policy, which highlights the tremendous impact Covid can have on markets. The Kiwi Dollar took it on the chin and is still dazed as traders price in a less aggressive path from the central bank.

The snap lockdown in New Zealand,and its resulting impact on the RBNZ, may have solidified the current Delta-variant driven wave into a more poignant argument for markets to take a bearish view until the pandemic recedes. That said, a substantial increases in daily case counts, or hospitalizations across key economies, could have a much sharper impact on market direction.

Elsewhere, Australia continues to face rising Covid cases even with large portions of the country under strict lockdowns. The risk-sensitive Australian Dollar is trading at its lowest point since November 2020 against the Greenback. New South Wales (NSW) reported a record 633 locally sourced cases on Wednesday.

The alarming rise suggests that the state and federal government is failing to contain the current Delta-driven outbreak. Health policy experts predict cases to worsen from here in the short term. That will likely strain economic activity, which is likely to translate into a softer path for the Reserve Bank of Australia (RBA). While the RBA doesn’t see a rate hike until 2024, the central bank may implement other measures, such as suspending plans to taper bond purchases. If forced to do so, the Aussie Dollar would likely see a substantial drop.

NZD/USD has fallen back to a zone of resistance that was formerly associated with a wedge, which appears to be holding as new support for now. The recent drop may be overdone, evidenced by RSI turning higher after falling into oversold territory. If the former wedge trendline breaks, prices may fall further. Alternatively, bulls will look to defend the level. 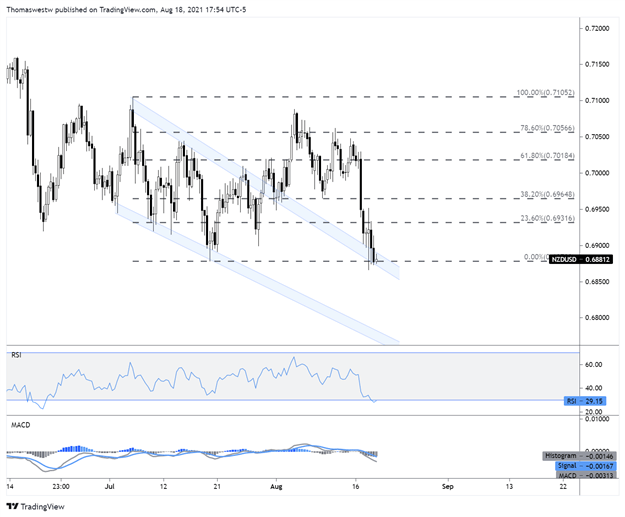